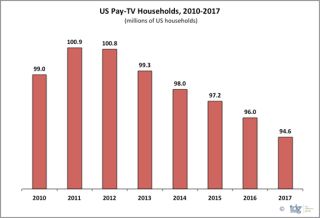 The new finding, in the report “PayTV Refugees: A Primary Profile of Cord Cutters and Cord Nevers,” offers a detailed profile of this small but growing segment of home entertainment consumers.

“Though pay TV operators rightly argue that OTT’s impact on basic video subscriptions has been negligible, when one focuses exclusively on broadband subscribers — those most likely to have access to OTT services — the numbers tell a different story.”

In a report based on the research, PaidContent wrote that for first time in history, cable watching peaked in 2011. It said the news comes as a tipping point in consumers’ struggles to break away from a TV industry that forces them to buy bundles of channels.

PaidContent said a TDG forecast claims that pay TV subscriptions peaked at nearly 101 million in 2011 but will decline to less than 95 million by 2017. It said the shift has ”long-term tectonic implications.”

Though they share obvious dispositions (they both subscribe to broadband but not pay TV) these two segments exhibit radically different profiles.

While TDG expects the number of former pay TV subscribers in both segments to increase over the next five years, it is cord-cutters that comprise the most immediate challenge for pay TV operators. The idea, notes Greeson, is that today’s young consumer is more technologically sophisticated than their predecessors, especially when it comes to entertainment.

In a world of net-connectable screens and online services like Netflix and Hulu, these pay TV prospects are fully aware of the existence and costs of such services. They understand the benefits and limitations of the online alternatives.

“Imagine you were a 20-year-old struggling to find a job (much less ‘the’ job), moving out on your own and for the first time faced with paying your own bills. Spending $80-$100 per month for a pay TV service, though enjoyable, is more of a luxury than a necessity.

“And by combining free over-the-air broadcasts with a couple of $8 per month OTT subscriptions and free online video, they can easily create an imperfect but sufficient substitution solution. And many will.”

The report features demographic and behavioral profiles of both segments, and offers a glimpse into the homes and minds of consumers that, for very specific reasons, have said “no” to traditional pay TV services. The report also forecasts for pay TV and home broadband subscriptions, as well as the growth of pay TV refugees through 2017.