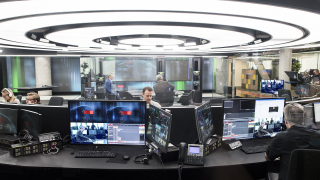 Adaptive storytelling. You might be thinking—what is it? Why does this matter? First of all, adaptive storytelling is the future of TV. I feel more confident about this than almost anything else. This is bigger than IP. IP video is big, but this is bigger because this impacts everything. It's not just how content is created and delivered but what content is created and delivered.

In Western Europe and America, we're probably one of the only generations that grew up having a TV set in the living room. In our mind a TV set is “something.” But then to the rest of the world, it's something totally different. A mobile phone is what a TV set looks like. This is amazing. This is the best thing that ever happened because it used to be that to watch a live show you needed to sit in front of the TV set at home to watch, let's say, the 9:00 news. This is obviously no longer the case.

Mobile devices have made live video accessible everywhere in the world in a period of about 10 years. It's already happened. There are now about 5 billion mobile devices out there. Every human on Earth can watch live video anywhere. You don't need to be at home. I mean, who really thinks about what time the news is coming on anymore?

To a traditional TV station, this is scary stuff. This is reality. So, when people say, “TV is at a crossroads,” it really, genuinely is.

The best analogy to see where all of this is going is to think about printed media. Think of a newspaper—it was a printed page with a fixed aspect ratio. Look at what happened to the newspaper market. Things were not going so well. The smart ones adapted as they went online. It is no longer the same thing.

The New York Times has a video player on their web page. They have interactive content and targeted ads. They’ll let you know when there's a “local” thing, so they know something about you, they know a little about what you like, etc. That has fundamentally changed this concept of how to present a piece of content to you. This is what the future looks like for news media.

A SIMILAR CHANGE IS COMING FOR TELEVISION

TV is at a similar crossroads. The way we move forward is this concept called “adaptive storytelling.” The goal is to take stories and make them acutely personal to people. What's fueling this decline in traditional TV viewership is that everybody is now going on social media because those are personal stories. So, the challenge for broadcasters is how to make stories go from being this “fixed thing”—that once came out of the antenna—and transform it into something that's more personal to their viewers. Something that takes a lot of different shapes.

The obvious reference here is the shape of their viewing device. It is now as crazy to think that we should be looking at all video at a 16:9 aspect ratio as it would be to say that we should read a newspaper or a web page always at a fixed size. It just doesn't happen anymore. People are looking at video everywhere: on web browsers, in their car, on their phone, their tablet. We need to make it easy for producers to push out video and make it so it can be truly viewed on all of those devices. It's got to be quick, easy and cost effective to do, but it's got to go further because that is just the beginning. That's just changing the size of the screen.

We've got to make it so that you can deliver real customized content to your viewers. That is what makes the website so special for the news media. There is no reason that when you watch a game that the graphics shouldn't be in the color of your team. There's no reason that stories shouldn't be customized to your particular interests. There’s no reason when you're looking at a show that you shouldn’t see your local weather in your local time. Add to that whatever is relevant to you locally—sponsorships that are local and personalized to you.

All of these things are going to happen, and there is only one way to get there: through software. An approach we call software-defined visual storytelling (#SDVS) will enable this, which I describe in more detail in this article.

We're going to create the tools that enable this, and it will be what really drives the future of video and TV on the web. I'm utterly convinced that this is going to be the thing that changes this industry. It is exciting, and it is an exciting time. That is why I come to work excited and with a purpose.

Dr. Cross is head of research & development for the Vizrt Group.