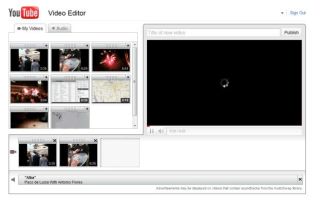 SAN BRUNO, CALIF.: YouTube has added video editing capability. The new feature allows YouTube users to cut excerpts from posted clips and create new videos. Music files can also be added from the AudioSwap library, but doing so may activate certain display ads, according to the announcement at Google Blogs.

YouTube launched a Flash-based video editor in 2007 called “YouTube Remixer,” but it was discontinued. “The service was based on Adobe Premiere Express, and despite offering features like transitions, captions and adding images, it was slow and buggy,” the blog says.

The newer application is basically a cut-and-paste affair. The blog announcement contains a link to the editor. That link takes a signed-in Google user directly to an interface with a window of their YouTube library. Several thousand users have already put together edited videos. None appear to be Oscar contenders. (See “I created this video at...”)
-- Deborah D. McAdams