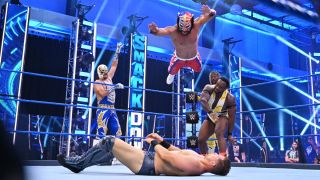 Some wrestlers on the WWE payroll are objecting to matches continuing to be taped for television, despite the lack of fans in the stands.

According to “Ringside News,” some prominent wrestlers (who were not identified) said they were worried about their jobs if they didn’t show up to the tapings. Despite the pandemic shutting most television production down back in March, WWE returned to the airwaves in April, performing in fan-less arenas.

Even though participating wrestlers undergo testing for coronavirus, a number of wrestlers still are balking about returning to the ring.

“I know people who are going, but think it should be shut down,” host Dave Melzer said during an episode of “Wrestling Observer Radio.” “I mean if you’re Roman Reigns you don’t have to go and if you’re Daniel Bryan you probably don’t have to go, but if you’re most guys you kinda need a good reason not to go. There are guys who aren’t big names who haven’t been going because of, you know, like there are certain family issues [WWE] was accepted. I don’t know how many people are thrilled to go.”

He added that just because a known name in the WWE community isn’t appearing on the weekly matches, doesn’t necessarily mean that they have coronavirus.