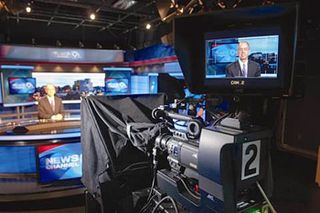 JVC Professional Products has announced that Syracuse, N.Y.’s ABC affiliate, WSYR-TV, has converted its local news operation to high definition with JVC ProHD cameras. The new cameras are being used both in studio and ENG applications, with GY-HM700s being used for field applications and GY-HD250s paired with JVC RM-LP25U ProHD local remote units placed into studio service.

The new camcorders’ shoulder-mount form factor and interchangeable lenses were important considerations in making the move to JVC, according to Craig Riker, the station’s chief engineer.

“The guys are coming back with better looking video than we’ve ever had,” Riker said. “We’ve got the best looking field video on air in the market.”

The news production process at WSYR-TV has also been simplified by the addition of the JVC camcorders, as they have provided a migration path from tape to file-based operations.

WSYR-TV is owned by Newport Television, and is the second Newport operation in upstate New York to move local news to HD.