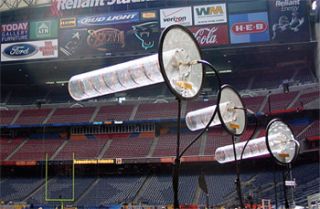 LOS ANGELES—With the 700 MHz band having finally been vacated to make way for the big telcos, there is less frequency spectrum in which to fit all of the wireless audio and production communications channels at major sports and entertainment broadcast events. And as if that didn't pose enough of a challenge, the frequent use of v

Working in the new RF environment has taken some getting used to, according to David Bellamy of Soundtronics Wireless in Burbank, Calif. "I had to learn how to play in the mud and not get dirty," he observes.

The key is to maintain separation between all of the wireless equipment by controlling the RF environment inside of the antenna system, says Bellamy, who has 15 years of experience as a wireless audio coordinator on the Grammy Awards telecast, not to mention decades handling other major broadcast events. At last year's Grammys, he had to wrangle a total of 73 mic channels—over three dozen simultaneously during one song. This year, there were only 47 in total. But, he stresses, "Because we had so little spectrum I had to keep very close tabs on everything."

With careful planning and by tracking RF mic, in-ear monitor and instrument channels on an easel—"my war board"—Bellamy was able to keep tabs on everything from one scene to the next on the telecast. As he notes, "It's going to have to be that way from now on."

James Stoffo, a Florida-based RF specialist who founded Professional Wireless Systems (now part of Masque Sound in E. Rutherford, NJ), and has been working in the field since the 1980s (and in U.S. Navy subs before that), comments, "The zen of wireless says that you must look at the world from the receiver's perspective."

Maintaining separation between wireless equipment is key, agrees Stoffo, who has handled upward of 1,200 RF channels at past Super Bowls. "It's all about keeping the noise floor as low and as quiet as possible. Then you get a cleaner signal, better range, and you really get better audio quality because of the cleaner RF signal. It gives you less distortion and a better signal-to-noise ratio."

David Bellamy had to carefully manage RF at this years's Grammys due to the reduced frequency spectrum available. Although Bellamy and Stoffo utilize specialized and even custom equipment, certain mic manufacturers, including Sennheiser and Shure, provide software tools, for example, that allow users to navigate the RF spectrum and avoid interference. Shure's Wireless Workbench, for instance, plots available spectrum and allows a user to spot potential RF problems while also charting signal strength, performance and other parameters of multiple Shure UHF and UHF-R systems.

At the NBA All-Star game earlier this year, Stoffo had to steer clear of Turner Broadcast's IFB and intercom systems. "You play every trick in the book that you can to make sure that your system is the only one that gets picked up by your antennas, including filtering," he advises. Stoffo also had to set up a second antenna system for the 2.4 GHz data transmitters controlling the on-player mic setup.

One method that Stoffo has long employed to control pickup is the use of highly directional helical antennas, which offer the most forward gain and the tightest polar pattern. At Super Bowl XXXV in 2001, for instance, he says, "There was such a long throw between my position and where they expected [Aerosmith's] Steven Tyler to sing that I actually had two special helical antennas made that were twice as long as a normal helical."

Thankfully, some manufacturers are developing new technologies that are more resistant to interference and could make the job of the wireless coordinator somewhat easier in the future. AKG, for one, introduced its DMS 700 digital wireless system in 2009, offering better audio quality, less chance of interference and improved security through encryption.

Audio-Technica, too, put its SpectraPulse system—which utilizes patented Ultra Wideband technology—onto the market in 2007. Although the initial offering has been designed mainly for corporate boardroom applications, the technology—which bypasses congestion in the UHF, VHF and 2.4 GHz bands—surely points to future pro audio products. Indeed, SpectraPulse enjoyed its TV debut in October 2008 during the third U.S. presidential debate.

Audio-Technica Spectra Pulse RF interference from non-audio products is becoming an increasing problem, according to Stoffo. At the All-Star game, for example, "When they lit up the scoreboard, it raised the RF noise floor all across the wireless mic band."

Video assist systems, which transmit video wirelessly to a display, also pose a significant challenge, he says. "A video signal is 6 MHz wide. Wireless mics take up about 100 kHz." Such a video system operating in the wrong band can easily take out a roomful of mics.

Although the FCC regulates video assist systems, Stoffo has also encountered homemade rigs. Plus, he observes, "Video guys know even less about RF than audio guys."

Then there are the displays. "LED screens are enormous RF radiators, especially in the lower frequencies," says Bellamy. One solution is to boost the power at performer or presenter audio transmitters. At the Grammy Awards, he says, "By increasing the power on those transmitters I could decrease the sensitivity of the channels that they were in, nullifying the effects of the screens."

Stoffo believes RF coordination will be an increasing challenge going forward. "With congestion, and the [FCC's RF spectrum] auction, it's only going to get worse.

"White space devices are probably going to be on the market in two years or so. At that point the FCC will have defined exactly what TV station wireless mics are allowed to operate in and white space devices are not allowed to operate in. We're going to have to try to get a couple of hundred wireless microphones into two TV channels instead of the 15 or so that we have now."