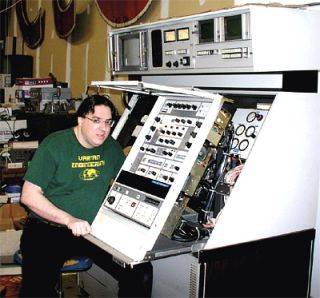 In the first part of this story, I reported that the Museum of Broadcast Technology in Woonsocket, R.I. had restored to operating condition a fairly large number of television broadcast cameras and quad videotape machines. Unfortunately, at other such museums, this seems to be the exception rather than the rule.

Finding replacement parts for 40-50 year-old equipment isn't always easy, nor is locating someone with the necessary repair skills. Also, there's the reality that in many cases, critical assemblies such as camera control units, special cables, circuit cards and other essential and irreplaceable items have been lost at some point in the life and/or movement of these vintage cameras, VTRs and other gear.

This is one of the few Ampex AVR-1 VTRs that can still pump out video. It’s now owned by the Pavek Museum of Broadcasting and was coaxed back to life by volunteer Jeff Bobgan. However, the Pavek Museum of Broadcasting, located in the Minneapolis/St. Paul metro area, takes pride in keeping several videotape machines up and running. One of the more unusual is an Ampex AVR-1, which had a reputation for being cantankerous due to its elaborate vacuum system and very different approach to timebase correction (switched multiple quartz delay lines).

Museum Managing Director Steve Raymer reports that in spite of this bad rep, the Pavek's AVR-1 performs quite well, and even provides a slight revenue stream, as it allows the museum to offer a quad tape-to-modern media migration service. Curiously, this incredibly complex machine was not coaxed back to life by someone who spent weeks in training at Ampex's Redwood City facility or who made his livelihood by maintaining VTRs. Actually the museum's quadruplex guru, Jeff Bobgan, never touched a 2-inch machine until he volunteered to help with the restoration project. He's described by Raymer as a genius and consummate AV nerd, and someone whose day job is operating a company that builds precision machinery for making plastic eyeglass lenses.

Other Pavek operational gear include a 1959 Collins audio console that's in almost daily use in connection with an educational outreach program. Raymer reports that some 5,000 schoolchildren visit the museum annually and are encouraged to participate in production of modern radio programs using vintage equipment. The institution also sponsors classes in radio repair/restoration, amateur radio license preparation, as well as electricity/electronics classes for young people.

Other unusual items in the museum include an RCA TK-10 camera and the Houston Fearless crane that it's mounted on. Raymer has documentation establishing that the camera was used in coverage of the 1952 Chicago presidential nominating conventions. The crane is unique in that it sports serial number one in its series. (It was originally used at Twin Cities station WCCO-TV.) And while not specifically related to television broadcasting, the Pavek has a very rare Alexanderson high-frequency alternator that was used to generate a radio frequency carrier wave. An earlier model of this mechanical device served as the AM transmitter in the world's first attempt at broadcasting on Dec. 21, 1906.

Another Midwest institution housing broadcasting artifacts is Chicago's Museum of Broadcast Communications. While its founder, Bruce Dumont, the nephew of TV pioneer Allen B. Dumont, admits that it's centered around broadcasting "software" or programming, it does sport an early WGN-TV RCA TK-41 color camera, as well as another RCA camera that was used by Chicago's WBBM-TV in coverage of the first of the four 1960 Nixon/Kennedy presidential candidate debates. There's also an Associated Press teleprinter with wire copy left over from the Nov. 22, 1963 Kennedy assassination.

This 10-bay “batwing” transmitting antenna once pumped television into thousands of TV sets and is now on display—along with a great deal of other equipment—at the Bolack Electromechanical Museum in Farmington, N.M. If your travel plans should take you to "The Land of Enchantment," and you're interested in viewing a very serious private equipment collection, think about heading up to Farmington, in the northwest corner of New Mexico (and about a two and a half hour drive from Albuquerque), the home of the Bolack Electromechanical Museum. And while it's not a broadcast museum per se, it does contain a great deal of representative television and radio broadcast equipment. Its founder, Tommy Bolack, has been collecting "techno" gear since his grade school days and has amassed a collection that fills three 12,000 square foot buildings at his 13,000 acre ranch in Farmington. (Some of the collection overflows outside the building complex.) Many in the region—including broadcasters—know about Bolack and his desire to acquire "electromechanical" equipment, and when it's time to get rid of something that might fit within his very eclectic collection they give him a call.

"Albuquerque's KOB [TV and radio] has been really good to me over the years," said Bolack. "I've received most of their castoff gear."

In addition to several transmitters—both television and radio—you'll find a good assortment of quad and other VTRs, along with other station gear. However, perhaps the most striking (and visible) piece is a complete VHF high-band 10-bay "batwing" transmitting antenna mounted on a mast outside the museum buildings.

The Southwest Museum of Engineering, Communications and Computation in Glendale, Ariz., is another southwest institution loaded with broadcasting artifacts. Its founder, Ed Sharpe, says he began preserving electronic communication history during his grade school years, not long after someone gave him a copy of Fred Terman's book on radio engineering.

"I started collecting radios about the time I was in the fourth grade," he said. "I was the neighborhood pest, pulling sets out of the trash and begging parts from the people at a nearby NIKE radar site."

Sharpe's collection has grown to thousands of items, including some very well-preserved broadcast camera chains (including a rare RCA TK-14), video switchers, and a number of small format VTRs, with 1-inch formats from Ampex and Sony quite well represented. He has a lot of "paper" too, including many early Gernsback publications. "I like to think that we're as much of a research archive as a museum," Sharpe said.

There's another private collection of early TV gear located in East Texas—Chalk Hill to be exact—that stands out in its uniqueness. Owner/curator Chuck Conrad wasn't satisfied with cameras and VTRs (he has about 100 pieces), and has added a very large icon of early broadcasting—a DuMont "Telecruiser" mobile unit, the great granddaddy of today's production trucks.

"The bus was outfitted by DuMont Labs in East Passaic [N.J.]," said Conrad. "It was delivered to KBTV [now WFAA-TV] in Dallas in 1949 and has a plaque stating that it's serial number 101, probably the first one made. The 'Hubometer' on the bus shows that it's traveled 16,400 miles. I've talked with people who drove it and used it and they verified this mileage. The station used it until around 1972."

Right now the Telecruiser is in less than perfect condition, but Conrad plans to restore it to its full 1949 glory.

"Unfortunately, a lot of the original equipment was lost along the way," he said. "Marconi cameras were used to replace the DuMont units. The original DuMont video 'switcher' used in it had rotary knobs for doing cross fades. It was equipped with a microwave link, but that was stripped also. My plan is to completely restore the bus as much as possible—paint, upholstery, and the reconstruction of the original equipment racks."

This 1949 DuMont “Telecruiser” was an early TV field production vehicle. It’s in admittedly rough shape, but it’s current owner, Chuck Conrad, has plans to restore the bus to its former glory. Conrad maintains a virtual museum of his early equipment on the Internet, but does open his collection for close-up viewing by appointment.WEST VIRGINIA BROADCAST GEAR

The interesting gear isn't all out west. The Museum of Radio and Technology in Huntington, W.V. is spread across an old elementary school building, with 10,000 square feet of display area and contains a very good assortment of early electronic gear. While a lot of the 6,000 or so artifacts are consumer related, the museum hasn't neglected broadcasting gear.

"I'd say that10-20 percent of the collection is broadcast-related," said Geoff Bourne, the museum's president and curator. "And probably another 10-20 percent of that is television equipment. We have a 1939 camera on exhibit, as well as a TK-47, and an RCA TR-50 quad VTR. There's also an RCA TP-66 projector, slide projector and optical multiplexer that was used for putting film on the air."

This account of broadcast-related museums began with a "caution" that such equipment wasn't featured in such museums as the Smithsonian; however, the Washington D.C. area does have a slightly smaller independent museum all about broadcast communication. The National Capital Radio and Television Museum, in suburban Bowie, Md., is home to more than 1,000 broadcast-related items, according to its director and curator, Brian Belanger. While most of these are consumer-oriented, Belanger acknowledged that there were several broadcast audio consoles in the collection and a variety of broadcast microphones. Early television is well represented by a working model of a mechanical TV system, and an original J.L. Baird "Televisor" from the early 1930s. Another rare item is a 70-year-old Crosley "Reado" home facsimile machine that was used to deliver a daily newspaper to private homes via radio during broadcasters' "experimental hours." It might be thought of as the forerunner of today's Internet delivered news.

All of the museums described in this series maintain Websites listing operating hours, locations, telephone numbers and other information. Prospective visitors are especially encouraged to call ahead for appointments, as some of the collections described are open only by prior arrangement.