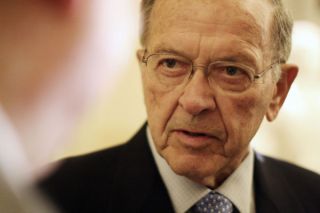 WASHINGTON: (Updated) News outlets are reporting confirmation that former Alaska Sen. Ted Stevens has died in a plane crash. The senator was 86.

He and as many eight other passengers were reported to be flying in a single-engine overwing aircraft to a fishing lodge near Lake Aleknagik in southwestern Alaska. The aircraft went down Monday night. Five were reported to have been killed in the crash, which another aircraft reported to the Alaska Air Guard. Former NASA administrator, Sean O’Keefe was also believed to be on the plane. His status remains uncertain.

Stevens was the longest-serving Republican senator in U.S. history, since 1968. He left in 2008 after being convicted of lying to the Senate, though a federal judge later dismissed the conviction based on prosecutorial misconduct.

Stevens headed the Senate Commerce Committee during the second Bush Administration and was heavily involved in DTV transition legislation. He shared control of the committee with his Democratic colleague, Sen. Daniel Inouye of Hawaii, also a veteran of World War II. Stevens and Inouye demonstrated non-partisan respect for one another now rare on Capitol Hill. Inouye said Stevens was like a brother to him.

“Our friendship was a very special one,” Inouye said of Stevens. “When it came to policy, we disagreed more often than we agreed, but we were never disagreeable with one another.”

President Barack Obama said that as a decorated World War II veteran, “Sen. Ted Stevens devoted his career to serving the people of Alaska and fighting for our men and women in uniform. Michelle and I extend our condolences to the entire Stevens family and to the families of those who perished alongside Sen. Stevens in this terrible accident.”

NAB President and CEO Gordon Smith served with Stevens during his tenure as a member of the Senate Commerce Committee, chaired by Sen. Stevens from 2005-07. Before he became a U.S. senator, Stevens was an attorney in Anchorage and worked for the Alaska Broadcasters Association, drafting its articles of incorporation in 1964.

“Sen. Stevens was a towering figure in the U.S. Senate and shepherded some of the most important communications legislation through Congress during his tenure on the Senate Commerce Committee,” Smith said. “Broadcasters have lost a friend, but America has lost a war hero and a legislative giant. Our thoughts and prayers are with his family and fellow Alaskans.”

Early reports of whether Stevens survived the accident were conflicting. A family friend, Dave Dittman, originally told local Alaska news outlets that he’d been informed of Stevens’ death. Several news outlets picked up his comments, then Dittman told Reutersat around 1:15 ET that the former lawmaker’s death could not be confirmed.

Stevens survived a Learjet crash in 1978 that killed five, including his wife Ann. He remarried in 1980 and is survived by his second wife, Catherine, their daughter; and five children from his first marriage.
-- Deborah D. McAdams