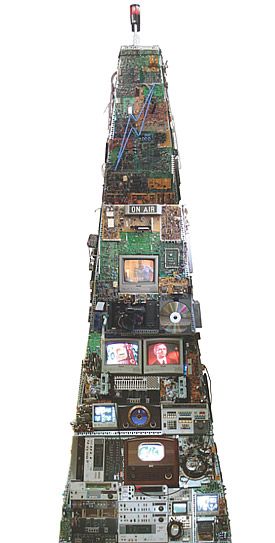 CHICAGO—A special one-of-a-kind sculpture, largely comprised of television-related artifacts, has been installed in the new Museum of Broadcast Communications headquarters. Towering some 17 feet above a five-foot square base, the assemblage of TV monitors, cameras, VTRs, circuit boards and other bits and pieces of consumer and professional broadcast gear was commissioned by the museum and designed by Cincinnati artist Mark Patsfall to serve as a tribute to those involved in the field of broadcasting.

“It’s everything I hoped it would be,” said Bruce DuMont, founder/president of the museum, and nephew of the late television pioneer, Allen B. Dumont. “The philosophy behind the creation is a tribute to the men and women who worked behind the scenes in broadcasting—the chief engineers, people who worked in tape rooms, ENG crews; all the people whose efforts are necessary to provide television. We think that the techies in the TV business will spot things in the sculpture that will remind them of something they’ve worked with or on.”

The sculpture is far from a static assemblage of radio/TV artifacts though, monitors contained within it are fed with vintage video recordings, illuminated neon tubes form part of the design, and there’s a flashing red beacon reminiscent of tower warning lights on top.

“Everyone says it reminds them of the Hancock tower,” said Dumont.

The sculpture has been in the works for the past five years according to Dumont. “When we began the project, the museum had had a number of things donated for our use,” said Dumont. “We had a lot of extra equipment and had this material put on a truck and shipped to the artist in Cincinnati. The rest evolved. He sent pictures once in a while as it progressed.”

Dumont explained that Paul Rostron, president and CEO of Chicago-based Roscor Corp., was a driving force behind the sculpture.

“Paul Rostron is a member of the board and has been very helpful in putting our house in order,” said Dumont. “It’s sort of the ‘Roscor media tower,’ and this is fitting, as they rented and sold a lot of this stuff.”

He noted that Panasonic had donated the monitors incorporated in the sculpture.

The Museum of Broadcast Communications was opened to the public in 1987 and is located at 360 N. State Street in downtown Chicago.