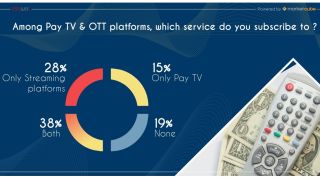 MT. PLEASANT, S.C.—When it comes to the choice between paying for pay-TV or OTT platforms, two-third of U.S. consumers are saying, “why not both?” According to a recent survey done by Piplsay, a combined 66% of Americans are signed up with a streaming service, but 38% have both a streaming and pay-TV subscription.

In addition, most Americans spend more for pay-TV services than streaming platforms and watch it longer, with 60% spending more than two hours per day on pay-TV, compared to 41% of OTT subscribers.

However, when it does come to either or, streaming does have the edge, as 28% of Americans said they were signed up just for an OTT platform, while only 15% subscribed just to pay-TV; 19% said they had no subscription service.

Age is proving to be a defining trait in viewing preference. Piplsay found that 38% of Gen Zers watch content only on streaming platforms, which was the highest amongst any age group. One respondent, whose age was not provided, said that she only watched streaming platforms because their price and programming they offer were better than pay-TV.

Despite the service that they are using to watch content, the TV is still the most popular method for consumers. TV was the primary option to watch content for 58% of respondents. The next closest was mobile at 17%.