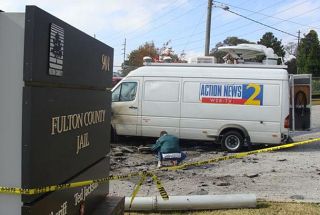 ATLANTA: Two WSB-TV crew members for escaped serious injury after their ENG van mast struck a power line and exploded in flames Wednesday, according to The Atlanta Journal-Constitution. The incident happened when the two were leaving the parking lot of a local jail with the mast of the truck still extended. It hit a Georgia Power high-voltage line from a substation across the street from the jail, AJC said. The line carried 115,000 volts.

“Georgia Power workers on the scene were surprised anyone lived,” AJC said, quoting a police statement. “The 115,000 volts traveled through the vehicle and ground, also hitting and destroying a water main which caused water to be out in the area.”

WSB reporter Tom Jones and videographer Leonard Raglin were treated at a hospital for smoke inhalation and burns, and released.

WSB’s Don McClellan wrote on the station’s Web site that Wednesday’s was not the first such ENG incident at the Atlanta ABC affiliate.

“I and my photographer partner, Dan Casey, did it several years ago,” McClellan wrote. “I was the guilty driver. Dan and I were trying to make our deadline for feeding a story in for the 6 p.m. news. We were at spot in Cobb county from which we’d sent a micro-wave signal many times before. Dan was editing. I was manipulating the mast controls. But for some unexplained reason, the shot wasn’t getting in that day. We were only about 20 minutes from the station, so I told Dan to keep editing... that I would drive us to WSB. I was so focused on getting the story in on time that I drove out of the parking lot on to Cumberland Blvd. near Cumberland Mall.

“The next thing I remember is a crash and a horn honking. The mast had hit a tree limb that came down on the fender of a car behind us. I quickly stopped, realized what had happened and lowered the mast. I gave the driver whose car the limb had damaged our insurance information, and continued on the way to the station.

“I’ve often reflected on how much worse it could have been had we hit a power line as our colleagues, Leonard Raglin and Tom Jones, did Wednesday. At the same time, I expect Leonard and Tom are thanking God they were not seriously hurt when 115-thousand volts traveled from the mast to the pavement beneath the truck.”

McClellan’s story reflects how such ENG accidents happen--crews are focused on dealing with technology and meeting deadlines. Lives have been lost and otherwise tragically altered in ENG accidents. Industry safety evangelist Mark Bell has written extensively about ENG mishaps at his ENG Safety Page.