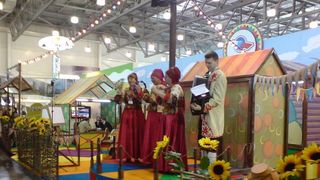 Russian pay-TV operator Tricolor has set a bullish target of reaching 16 million subs by the end of 2015 and overtaking the UK’s BSkyB and Dish Network in the U.S. to become the world’s No. 2 DTH provider in the process.

The company believes that its currently successful strategy of virtually giving the service away with a basic free package, and then upselling premium content, will continue to pay off and achieve substantial gains. At the same time, it hopes to build both revenues and its subscriber base on the back of an affordableHDTV offer, providing 25 HD channels for €23 ($30) per year extra on top of existing paid plans. The company says it is aiming to have reached 7 million HD subscribers by the end of 2013.

Whether the projected numbers will be achieved depends on how subscribers are counted, with some confusion given the existence of a free basic package. The figure of 11 million customers claimed for 2012 may include those using just free content, and the number of pay TV subscribers is currently less, at 8.9 million, according to UK-based analyst group Rethink Research. On that basis, Tricolor is highly unlikely to reach 16 million paid customers within three years, with Rethink predicting 12.1 million.

There is little doubt, though, that Tricolor will consolidate its status as Russia’s leading pay-TV operator, followed by cable operators Rostelecom and MTS as clear Nos. 2 and 3. Tricolor has also said it will launch VOD and catch-up platforms, while looking at bringing in OTT content via the HbbTV hybrid platform that is rapidly gaining ground across Europe.