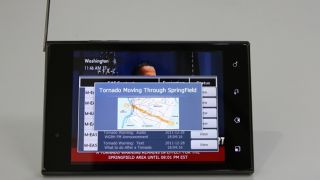 First responders from around the nation gathering this week in Minneapolis for the annual Association of Public-Safety Communications Officials (APCO) Conference & Exposition will get a chance to see firsthand how the proposed Mobile Emergency Alert System (M-EAS) can be used to reach millions of people with a single digital TV broadcast.

In keeping with a conference focus of public safety communications, data security challenges and emerging technologies, representatives from the broadcast community will conduct a live M-EAS demonstration Aug. 21 at noon.

Relying on prototype LG mobile phones equipped for M-EAS, the demonstration will show how easy it will be for local TV stations to transmit mobile DTV signals with rich media emergency alert content for simulated national and local emergency scenarios, including a “suspicious package threat,” an “approaching tornado,” an “AMBER Alert” and “impending tsunami.” The broadcast community did similar demonstrations at the 2012 International CES and 2012 NAB Show earlier this year.

The Public Broadcasting Service (PBS); LG Electronics, which developed M-EAS receivers; its Zenith subsidiary, which provided technical support and funding for the project; and Harris Broadcast, which supplies the necessary technology to TV stations, are supporting the demonstration.

“Mobile-EAS is a powerful new tool for both public alerting and tactical video for first responders, and it’s an option that will soon be available nationwide to enhance public safety,” said John Lawson, an LG adviser and former member of four FCC advisory committees on homeland security communications.

“Harnessing the power of mobile digital TV broadcasting, M-EAS easily overlays an entire metropolitan area with a signal that is not dependent on mobile wireless network infrastructure,” he said. “It effectively bypasses bottlenecks caused by congestion and will deliver rich-media content to mobile phones, tablets and APCO-25 standardized emergency responder radios.”

Calling M-EAS “extremely valuable to federal, state and local emergency management agencies” and the public, Lawson, who also serves as the executive director of the Mobile500 Alliance, said this new way to reach the public in times of emergency extends the community service role of TV broadcasters.

According to PBS CTO John McCoskey, work done over the past year proves the viability of the M-EAS concept. It offers an effective means of reaching millions of people with a single broadcast rather than “relying on access to an overburdened wireless mobile network,” he said.

M-EAS has undergone a yearlong pilot in Massachusetts, Alabama and Nevada. The new alerting application developed during the pilot project relies on existing standards for implementation. At the core of the ATSC A/153 Mobile DTV standard is the use of Internet Protocol (IP), which allows the new M-EAS application to be flexible and extensible. Data delivery, non-real-time delivery, and electronic service guides are all included. M-EAS is compliant with the international Common Alerting Protocol and designed for full incorporation into the U.S. Integrated Public Alert and Warning System.