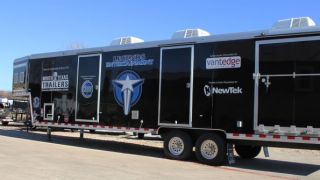 The Texas Legends, an NBA D-League team based in Frisco, TX, have built the ChyronIP real-time HD/SD 2-D and 3-D character and graphics generator into a new best-of-breed mobile production trailer powered by a NewTekTriCaster live production system.

“ChyronIP gives us more robust capabilities and added flexibility in the overall graphics presentation of Legends’ broadcasts, ultimately resulting in more graphics and an enhanced on-air presence,” said Bill Boyce, president of the Texas Legends. “The seamless integration of ChyronIP with our NewTek TriCaster system allows us to leverage the consistency of Chyron’s Lyric software to match larger-scale broadcasts in the creation, storage and playout of graphic content. The credibility we gain with such graphics adds significantly to our ability to generate greater revenues from Legends’ telecasts.”

The Texas Legends’ trailer was custom-designed by North Texas Trailers and Vantedge Sports Media. It features an internal green-screen studio and a game-day studio with 200sq-ft fold-out stages, and a broadcaster desk that can be used inside or outside of the studio. This setup allows users to emulate a TV broadcast studio or create an outdoor studio environment.

The mobile unit is powered by NewTek’s TriCaster and 3Play replay system, as well as NewTek’s virtual studio software. Within this environment, the ChyronIP delivers key and fill signals via the TriCaster network interface, which gives producers two live HD or SD full-motion channels of Chyron graphics without tying up any of the TriCaster's video inputs. The Texas Legends added a second channel to the ChyronIP system to support streaming graphics.