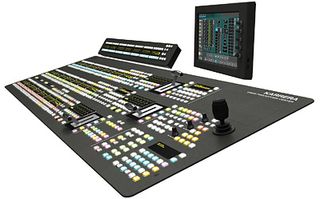 SAN FRANCISCO—It's the diligent worker bee at the heart of a production facility, overseeing swipes and managing last-minute format upgrades. Balancing a mix of flexibility and ingenuity, the newest line of production switchers that have hit the market can manage these requirements thanks to an evolving set of new options, both in the production control room and outside in the mobile vehicle, too.

Blackmagic’s ATEM production switcher is available in a 1 and 2 M/E version, and features 10-bit digital functionality. Segments of the marketplace have targeted key trends: the need for high-end effects, the desire to accommodate 3D, the move toward smaller but powerful options, and more. Portability is also a growing focus. A new, larger segment of the marketplace is targeting portable solutions that offer some of the same high-end features of large-scale production switchers but in bit-sized options.

That's been a strategic shift from companies like For-A and Panasonic—to offer a lineup of portable production solutions with large-scale features like frame sync and multichannel multiviewers. The newest switcher solution from Panasonic is the AW-HS50, a subcompact switcher that provides professional HD production features with 4 SDI inputs and 2 SDI outputs and a single DVI-D input and output.

Likewise, For-A offers the new HVS-300HS, a compact 1 M/E model that includes mixed HD/SD input, frame sync, and 2D and 3D wipe effects. Though it's known for its large-scale switching solutions, Ross has reached into the compact market as well, and recently released a compact switcher, the CrossOver Solo, a 1MLE production switcher.

As the industry tests out the role that 3D technologies will play in the backroom, production models have responded with basic stereoscopic switching options, such as a new 3D option as part of the Panasonic AV-HS450N production switcher. The system now provides a dual-channel 3D DVE that offers both 2D and 3D effects for key effects and transitions. Likewise, 3D inclusion was a key feature in the development of the latest version of the Kahuna 360 from Snell, a production switcher that offers a 3D DVE package with linear/nonlinear effects capability.

Simplicity reigns on the other end of the spectrum, where other systems are offering smaller all-on-one options that address multiple goals. An all-in-one solution from Roland Systems is designed to simplify the big three: recording, production and streaming of a live event. The VR-5 incorporates a switcher as well as mixer, recorder and monitor, all of which can be used for live broadcast productions or Web streaming applications. Datavideo has come up with the HS-2000 mobile studio, a system based on the SE-2000 switcher, which includes a four-channel audio mixer. Broadcast Pix has also ventured into the production-on-the-go arena with the Slate Portable, a Slate 1 M/E system in a portable package that also includes clipstore, CG and device control capability.

"We wanted to be able to offer technology that was accessible [price wise] and addressed what people want to do today: that they are aspiring to reach a higher level [in their production work]," said Dan May, president of Blackmagic Design. "There's a sub $5K client base that can't afford a $50,000 switcher, and that was a market we felt was being underserved."

Recently, there seems to be a boost in the number of mid-market stations interested in higher-end production solutions at mid-level pricing. The Karrera video production center was launched last fall by Grass Valley, offering users the opportunity to grow the system as needs expand, with two frame sizes, multiple frame configurations and varying M/E control panels. The digital 10-bit 4:2:2 video switcher offers up to 96 inputs and 48 outputs.

"People watching the game of the week are going to expect the same quality on their TV set regardless of the switcher in the truck," said Greg Huttie, director of production switchers for Grass Valley. "Customers were looking for a mid-range switcher with the features you find in the Kayenne," added Scott Murray, senior vice president of live production solutions for Grass Valley, "but that can work in studios, mid-market stations and OB vans."

Several companies remain focused on big, high-end production events, including Ross, which earlier this year introduced new features as part of its Vision Series high-end production switcher lineup, which can offer up to 4 M/E rows, 40 crosspoint buttons, dedicated M/E memory modules and control of up to eight M/Es. Designing for fast-paced productions was the goal behind the Kahuna multiformat switcher from Snell, a switcher with pixel-filtering technology that allows users to integrate any SD material into HD productions without the need for upconversion. After all, there's still high-demand for high-end production switchers that can handle headline events, like the 2011 NBA Finals, which used the Kayenne switcher from Grass Valley.

"The demand for those high-end systems remains a premium," Grass Valley's Murray said.

Other models are betting on the appeal of the ease-of-use factor. Datavideo offers the SE-3000 video switcher, a 16-input HD/SD production switcher with touch screen, dual multiview outputs and full-size keyboard. Broadcast Pix, for one, recently introduced the Mica, which includes a multidefinition switcher that can mix eight HD/SD-SDI inputs with seven channels of internal clips, animations and graphics.