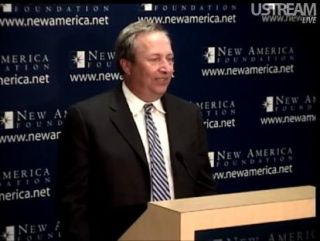 WASHINGTON: The government does not intend to force broadcasters to turn over spectrum for the National Broadband Plan, a White House official said this morning. It will look for available spectrum among government users as well as authorize a spectrum inventory, said Lawrence Summers, director of the National Economic Council.

“Our plan will allow all stations that currently broadcast the right to continue to broadcast,” he said in a speech at the New America Foundation. “It is based on the principal of voluntarism.”

Summers said stations volunteering to give up spectrum would receive a portion of proceeds from the auction of those airwaves.

“There are instances where local TV stations with annual revenues of hundreds of thousands of dollars using a spectrum band worth millions,” he said. “Realizing these gains will be the objective of our incentive auctions.”

Weighing in on behalf of the National Association of Broadcasters, Dennis Wharton offered the following: “Expanding broadband is important, and broadcasters will work constructively with policymakers to help them attain that objective. We appreciate FCC assurances that further reclamation of broadcast television spectrum will be completely voluntary, and we’re convinced that America can have both the finest broadband and broadcasting system in the world without jeopardizing the future of free and local TV service to tens of millions of viewers. We also believe the first priority of Congress ought to be passage of spectrum inventory legislation that identifies fallow spectrum or companies that may be ‘warehousing’ the airwaves.’”

Congress has been kicking around legislation requiring the FCC to conduct a spectrum inventory before reallocating licenses. No such bills have passed, however.

Summers said the president’s memo called for an inventory, but he provided no further details. The memo “releases 500 MHz with a two-pronged strategy, freeing up federal and commercial spectrum for new uses,” he said. “It will identify how we are using spectrum in the public sector.”

A background fact sheet issued by the White House just before Summers’ speech provided a few more details about an inventory. It indicates one is authorized, but is not required for the spectrum reallocation process.

“The federal government will create a publicly available inventory of the spectrum currently used by government and commercial users on a separate track from the NTIA and FCC processes to make spectrum available for new uses,” it said. “Although this inventory is not necessary to enable the repurposing of large swaths of spectrum, this inventory will enable spectrum holders and consumers to better understand how spectrum is used and facilitate more effective secondary markets transactions, thereby supporting the policy goal of ensuring the most efficient possible use of spectrum.”

Summers said there were no official estimates on how much money spectrum auctions would yield, though analysts estimate the total to be in the “tens of billions of dollars,” he said. “Most freed up spectrum will be auctioned off for use by mobile broadband providers.”

The first use of proceeds would be to build a nationwide, interoperable broadband network for public safety. The remainder would be reinvested into the country’s infrastructure.