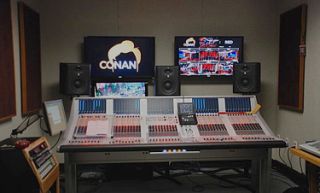 Harman has announced that two Vista 9 digital audio consoles in its Studer product line are now being used to produce “Conan,” the late-night talk, music and entertainment show, staring Conan O’Brien. The Vista 9 audio desks have been deployed at Warner Bros Studio Facilities’ Stage 15, the origination point for the show. They are being used in both the music mix control room and the production audio mixing facility.

“Conan’s shows are a huge mix of talk, stand-up, sketch comedy, remote locations and live music, and they’ll go from one to the other in a heartbeat,” said Paul Sandweiss, the sound designer for “Conan” and also president of Sound Design Corp. “The show is so fast-paced that, unlike most late-night talk shows, in addition to main production mixer Mike Stock and music mixer Brian Lodato, we also have a dedicated sound effects mixer, Rob Ohlandt. The consoles for this show have to be able to keep up.”

Sandweiss was also sound designer during O’Brien’s run as host of “The Tonight Show Featuring Conan O’Brien,” and had specified a Studer Vista 8 console in that application.