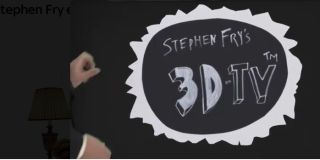 “3DTV’s no longer a gimmick,” he says, “and it’s poised to revolutionize the way we enjoy our entertainment. It’s far more than a man throwing something at the camera. So what is 3DTV, and will it make grandma’s eyes pop out…”

Fry describes how the 3D technology used in movie theaters is coming into the home. Content is filmed with two cameras capturing a view for the left and the right eye, he explains holding up goofy googly eyeballs in front of his face.

“Using a bit of wonderful digital trickery, both pictures are processed into to created a single image, which can only be viewed with 3D glasses,” he informs.

The three-minute spot offers a rudimentary explanation of the difference of passive and active 3DTV, and where the medium came originated. That would be Fry himself, who claims to have invented 3DTV. Until a SKy engineer walks in and says the TV provider’s been working on 3DTV for years. He’s clearly an engineer as identified by his long white lab coat. Fry gives the man a face blubber.

Fry’s performance is in 2D at Sky’s 3D Web site.