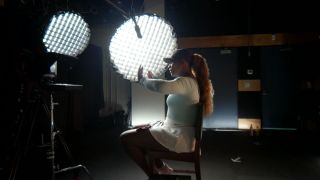 Serena Williams is interviewed at the US Open. (Image credit: USTA)

NEW YORK CITY—Getting up close and personal with sports stars can be difficult for TV producers during a pandemic, but hsc.tv has found a safe way to shoot specialty portraits and interviews of U.S. Open Tennis Championships players for broadcast elements and stories on ESPN and social media without exposing them to COVID-19.

“We knew the feature storytelling at this year’s U.S. Open would be unique and challenging,” said hsc.tv partner and award-winning cinematographer Bryan Brousseau. “We wanted to create a safe interview space where the players would be alone in a room and have no contact with crew.”

The idea was to create an environment in which there would be no contact between athletes and crew. Cameras and lighting would have to be remotely controlled, and the players being interviewed would be connected with the interviewer via a teleprompter, said Brousseau.

The solution deployed by hsc.tv relies on Panasonic AU-EVA1 and Panasonic VariCam LT cameras to deliver the 4K sensitivity desired and on Kessler pan-tilt remote heads and Tilta focus controls to control new prime lenses. For lighting, the DMX bronControl app was used to control fixtures, including F160 LED fixtures in Para 133 and Para 88 umbrellas, he said.

“For our custom TWZM practical lights, we used Leviton D4DMX-MD5 DMX dimmer packs to a hard-wired dimming board,’ he added.

“Our goal was to interview players remotely through a Zoom, call but we wanted to use Panasonic’s professional cameras to give the interviews a great look,” he said.

“The first and foremost aspect of this new zero-contact set-up is the ability for the player and remote producer to have clear and tangible audio. The main challenge to think about—the player has to hear the producer but not have that audio bleed into their mic.”

Diebner relied on the Schoeps CMIT 5U mic to leverage its supercardioid polar pattern while taking advantage of its low off-axis coloration for natural sound at all angles. “It’s important for the mic to be placed—not moved—and sound great,” he said.

The signal was fed to a computer audio interface, which in turn was sent to the Zoom meeting. Doing so made it possible for anyone on the Zoom meeting to hear the tennis player being interviewed loudly and clearly, said Diebner.

To overcome the challenge of feeding the producer’s audio to the player, Diebner relied on a high-quality JBL speaker to control volume, thereby giving him control over the amount of audio bleed from the producer into the Schoeps mic. “I also fed a little outside speaker for the players’ coaches and entourages,” he said.