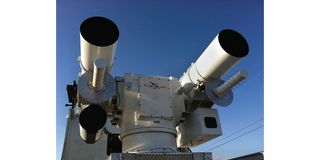 SANTA MONICA, CALIF.—In one l-o-n-g drop on Oct. 14, Austrian daredevil Felix Baumgartner proved that a man in a spacesuit could fall safely back to Earth from more than 24 miles high. He also proved that it’s possible to get outstanding video of the event and broadcast it live to millions on the Internet.

Baumgartner floated to the edge of space in Stratos, a pressurized capsule hung from a balloon. At a height of 128,100 feet, he stepped away from the capsule, fell freely for nearly 23 miles (including breaking the sound barrier), then drifted to ground on a parachute.

The event was captured by cameras stuffed into the capsule and by groundbased cameras with massive lenses, and relayed live to YouTube for a worldwide audience of 52 million. The primary sponsor for Baumgartner’s space jump was beverage maker Red Bull, and its media group— Red Bull Media House—pulled together all the cameras and necessary communications equipment.

“We knew that the technology existed to document the project,” said Charlie Rosene, executive producer for Red Bull Media House North America, in Santa Monica, Calif. “But how do you combine established, military-grade tools with state-of-the-art high-definition digital broadcast equipment so the world could experience this project from an intimate front-row seat?”

“We have partnered with YouTube for several years, and have worked closely with them in developing our digital channel that includes exclusive programming,” Rosene said. “YouTube also gave us a truly global exclusive digital streaming platform, as our goals were to touch not only the U.S., but a worldwide audience.”

“Just like Felix, we set a few records of our own, including more than eight million concurrent live streams on YouTube and 52 million views during our live presentation,” Rosene said. “Safe to say, we would do it again.”

The jump was also broadcast live on Discovery Channel, where it became the highest-rated non-prime television event in the network’s history.

‘OB TRUCK IN A CAN’
The Red Bull Stratos capsule was fitted with nine HD video cameras, three Canon still-image cameras and three RED 4K cameras, although one of the RED cameras was set to shoot 120 fps at 2K resolution. In addition to all that gear, there were five HD cameras on Baumgartner’s suit, all of which were record-only and did not provide live images.

Putting the camera systems together was the job of Jay Nemeth, Red Bull Stratos’ director of photography. He pointed out that there’s more to getting images from the edge of space than simply mounting a few cameras.

There were many technical concerns for the video gear.

“There wasn’t much that could be used off-the-shelf without some sort of modification,” Nemeth said. “The near-space conditions created problems with extreme cold, down to –95 degrees at one point and high temp conditions at the same time that required us to design and build cooling systems with complex heat exchangers. The REDs generate so much heat that we designed nitrogen-filled housings to give the fans a dry convective medium to circulate.”

Nemeth said that the HD video cameras used in the Stratos capsule were proprietary space-rated units that are not made by a manufacturer familiar to the video community.

The camera system design was finalized in 2009, which meant that the project couldn’t take advantage of newer products and developments.

“I would have loved to use the RED Epic on the capsule, but when we were constructing the housings and putting the control system together in early 2009, they weren’t available,” Nemeth said. “It just wasn’t possible to start the design and integration process over.”

MICROWAVE TELEMETRY
Riedel Communications provided three microwave transmitters in the Stratos capsule, as well as telemetry radios and receive equipment. Red Bull Media had one receive site at mission control in New Mexico, and another one downrange fitted with a FlightLine JLAIR long-range optical tracking system.

The signals received downrange were relayed back to mission control using 2 GHz and 18GHz terrestrial links provided by 3G wireless. Although the production team considered downlinking live video from Baumgartner in freefall, it was deemed a safety hazard by the science team, so the five cameras on Baumgartner’s suit were record-only.

Riedel has worked with Red Bull Media on a variety of projects, such as the Red Bull Air Race, so the company was a part of the space jump project right from the beginning. Still, Riedel’s experience had been all within the comforting envelope of the atmosphere, and providing live communications from 24 miles up would be… well, outside the envelope.

“There were number of challenges that were new to us,” said Thomas Riedel, president of Riedel Communications in Wuppertal, Germany. “Ranging from color correction and white balance challenges for the cameras due to the change of the atmosphere, to tracking and telemetry tasks that were more demanding than usual. Together with a group of specialists in the Red Bull Stratos team and our own R&D team, we managed to overcome them.”

If you’re interested in using a piece of historically significant equipment, you might be surprised to learn that it’s available for rent.

“Besides being a manufacturer, Riedel also runs a large-scale rental business supplying equipment to events and productions such as the Olympics and FIFA World Cups,” Riedel said. “The equipment used at Stratos will be part of our rental stock—a good measure of equipment already was part of our rental stock when we started working with Red Bull on the Stratos project, such as Artist digital matrix intercom systems and Medior- Net fiber backbone technology for distributing HD video/audio signals.”

Riedel said that there was much learned during the Red Bull Stratos project and that the experience was of “high value.” However, there are no immediate plans to create new products as a result of Riedel’s experience on the space jump.

“The biggest challenge was to gather all the data sources from all different ‘providers’ [capsule telemetry, Felix bio-meds, mission clocks, chest pack informations, and simulation data calculated in cooperation with the Technical University of Munich], and to deliver them to the world outside of the command center in Roswell, N.M.,” said Petter Ole Jakobsen, CTO for Vizrt.

Jakobsen pointed out that only standard off-the-shelf Vizrt gear was used for the project.

“The Viz Graphics Hub shared memory maps workflow was a breakthrough, allowing a normal Viz Trio studio workflow synchronized between the U.S. and Europe,” he said. “So even in a remote studio, the Viz Trio operator was accessing live data through normal page recalling— no third-party software needed to be installed.”

Scott Gillies, director of production and technology for Red Bull Media House North America, was responsible for the technical side of the television production for the space jump. As important as the video feed was, the primary concerns of the entire team were safety and situational awareness.

“We needed a system that would let us see the pilot, flight-train connections, and the balloon in real time during the flight,” Gillies said. “Secondly, we needed to see Felix during the descent. These were no small challenges, especially when there are tight timelines and multiple teams working together.”

So how do you create a production system for such an extreme event?

“The goal for the Red Bull Media House was to deliver the very best images possible given the constraints of physical space, heating/cooling and power consumption,” Gillies said. “If we could utilize existing technology that was robust enough, then we were pleased, but at the same time we wanted to push the envelope wherever possible.”

Despite pundits who decry today’s media landscape as fractured and fit only for those with attention spans measured in seconds, attracting 52 million views to a live nine-minute video is a significant accomplishment. Gillies points out that viewers didn’t tune in to see the gear.

“To make compelling content, the story and technology have to go hand and hand—one cannot outshine the other,” he said.

If you missed the live broadcast, there is a re-cap on YouTube and plenty of other videos available, including a documentary co-produced by BBC and National Geographic. That documentary was shown on National Geographic on Nov. 11, and included previously unseen video from one of the cameras on Baumgartner during the jump.