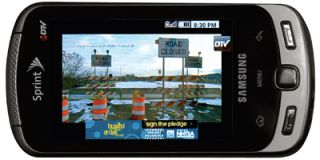 ALEXANDRIA, VA
Ongoing field tests of the broadcast industry's ATSC Mobile DTV standard by a few hundred consumers recently passed the halfway mark in the Washington, D.C. market (DMA 9), as the Open Mobile Video Coalition reported that "everything is on schedule." While the TV industry will be keeping a close eye on video reception, some will be gauging how well its loudness components hold up in a variety of mobile environments.

The Samsung Moment is one of several Mobile DTV devices offered in OMVC’s Washington, D.C. consumer field trials. Final test results are expected by late October and proponents are anticipating positive reviews. Apart from video, ATSC Mobile DTV can also accommodate audio-only channels. Commenting on the tests overall "we've had a few glitches that have nothing to do with the MDTV app, and more to do with beta OS software issues, which are expected in early beta devices," according to OMVC Executive Director Anne Schelle.

Sterling Davis, vice president of engineering at Cox Broadcasting, said "the challenge for audio over the mobile stream involves the newly identified need to process it differently than audio destined for the main channel of channels. It involves taking into consideration that audio will be listened to only on headphones or a very small speaker," Davis said. "I have not heard of [loudness] being an issue in the demonstrations."

Recipient NAB's Television Engineering Award a year ago, Davis said the ATSC is considering issuing a Recommended Practice related to separate processing. "It's certainly not a stumbling block—major or minor. It's hard to beat live TV in a mobile environment with its one-to-many distribution."

While heaping praise on the overall ATSC Mobile DTV standard as being nothing short of "fantastic," Carroll said his own audio samplings in the Washington test market have raised some red flags with him. A few months prior to this summer's Washington trials (sponsored by Samsung and LGE), and using some of the same devices in the current tests, he found the video looked quite good. "But the audio, turned all the way up, was so low I couldn't hear it unless I put the unit directly next to my ear and then, of course, I couldn't see the video." Carroll said when he subsequently sampled audio on his iPhone without earbuds in the same environment, he had no problem hearing it.

"I asked how this particular [Mobile DTV signal] was working, and an engineer told me they were taking one of their sub-channels from the station and plugging it directly into the encoder. And then I said, 'I think this is a problem.'" Carroll's firm is marketing the AERO.Mobile audio loudness manager which the former Dolby Labs product manager said employs newly developed "psychoacoustic processing" which goes beyond compression. He does not a requirement to always wear earbuds or headsets as a practical solution for mobile media.

Some D.C. area broadcasters participating in the OMVC trails are now using Linear Acoustic's loudness manager. "The problem for mobile is not one of loudness, but of loudness range," Carroll said. "And simple compression doesn't do the trick."

Specifically with ATSC Mobile DTV, Riedmiller thinks loudness could easily become an issue "depending on how it's handled prior to transmission. If you're just watching a few local stations in your area, that's one thing. But when these small units [evolve] into devices that can work with a wide array of different kinds of media—not just ATSC—it could be a challenge. I think that's where it's going.

"We're starting to see interfaces on [emerging] small devices that were traditionally only found on set-top boxes," Riedmiller continued. "Now some smart-phone units come with actual HDMI ports for relaying HD content and multichannel audio to the TV set or your home theatre directly from the phone. The overall challenge becomes managing the best experience to the user across all types of media, including ATSC Mobile, that are coming from an array of technologies and sources converging onto the same small device—which is where I see it all going," Riedmiller said. Yet even that combo-media approach for mobile devices could exacerbate audio issues, for awhile.

"If average loudness for music, for example, is 10 or 11 db below full scale, compare that with a typical TV show or wide dynamic-range movie where average dialogue loudness may be down around 31 db below clipping," said Riedmiller. "So when you switch between these different media, you're going to get huge jumps in level, and when you're listening through earbuds or an internal speaker, you'll automatically be searching for more 'gain' in the device to make it a more pleasing or even acceptable experience."

Riedmiller, who co-authored a white paper on "Loudness Normalization in the Age of Portable Media Players" for the Audio Engineering Society's 128th convention last spring in London, said "one of the things Dolby Labs would like to do this fall is engage with the ATSC mobile community. We'd like to work with them, including the device manufacturers, to share some of our findings and then get some feedback."