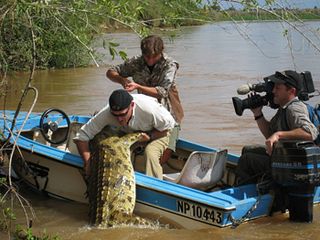 BUFFALO, N.Y.—If you’re one of millions of viewers of nature programs no doubt you’ve seen scenes like that described in Chris Palmer’s “Shooting in the Wild” (published by Sierra Club/Counterpoint) wherein a sea otter blithely eludes a shark swimming directly for it by simply diving and vanishing below the surface—without the shark in hot pursuit—all courtesy of CGI artists.

This is one of many examples of fakery and trickery revealed by Palmer, a veteran wildlife film producer and educator whose thesis is that “smoke and mirrors” have been used extensively in this genre since its inception. He recounts the adventures of Martin and Osa Johnson who provoked lions and elephants to charge them so they could shoot them in “self-defense” on camera, and the flamboyant Frank Buck, whose films featured staged fights to the death between uncaged animals. The obsessed filmmaker protagonist in the “King Kong” movies was modeled on him.

As Graeme Duane films, Brady Barr pulls a crocodile into the boat. This “nuisance croc” had attacked and killed residents of a small village in Sofali Provice of central Mozambique, and would be relocated. Photo © Brady Barr.INTERPRETED VIA HUMAN LENS

However, even family-friendly Walt Disney was not above using animal sacrifice to strike cinematic gold. In one classic scene in “White Wilderness,” scores of lemmings leap off a cliff into the Arctic Ocean in what is described as mass suicide, an “instinctive response” to cyclical overpopulation. Palmer reveals that this and many other scenes for Disney’s “Trials of Life” series were staged for the camera, often with no basis in reality. According to Palmer, “Disney used nature to promote virtues of the (WWII) times like hard work, persistence, frugality… dramatizing the struggles of animals for survival, to sell millions of movie tickets.” This helped provide Disney cinematographers with the latest tools like variable speed film cameras and fluid head tripods “to capture animal behavior and characters, but interpreted through a human lens.”

Jacques Cousteau, inventor of the aqualung, was also the first to take movie cameras underwater to reveal the dazzling colors of the coral reef in Technicolor. But Palmer credits him with much more. “Cousteau did something that other filmmakers often neglected; he provided context, about the sea itself and threats to its inhabitants.”

Marlin Perkins, a zoo director, did the same on terra firma, but with a business-friendly bent, connecting the life and death struggles of the animals featured on “Wild Kingdom” to the viewer’s need for life insurance from the series’ sponsor, Mutual of Omaha. Palmer reveals that many of these struggles were staged, although vigorously denied by Perkins who actually punched one interviewer for a tell-all expose, “Cruel Camera,” which Perkins successfully suppressed. Technologically, Perkins was among the first to use helicopters to bring us closer to wildlife, albeit stampeded by the chopper itself.

As cinematographer Bob Poole films cheetahs in Ndutu, Tanzania, one hops onto his Land Rover for a better view of the plains. Photo courtesy of Bob Poole. Although also accused of staging wild encounters with game farm wildlife, Marty Stouffer, creator of “Wild America,” advanced the genre with artful use of film techniques like time lapse, super slow-mo etc. However, this didn’t stop PBS from cancelling the series despite drawing some of the networks’ highest ratings.

Around this same time the BBC, National Geographic and the Discovery Channel introduced a mini-series “highlighting nature’s exquisite beauty, diversity and fragility.” This provided a matrix for broad, universal themed blue chip wildlife series like “Life on Earth,” “Living Planet,” the “Trials of Life,” which used the latest film and HD cameras to capture animal behaviors never before seen on any screen. These mega-series featured charismatic species and were hosted by charismatic journalist presenters like David Attenborough whose Anglo charm helped win huge global audiences for these finely photographed epics. More recent series like “Blue Ocean” and “Planet Earth” took motion effects like slow motion and time lapse to another level with the help of high-speed HD cameras from Vision Research’s Phantom line.

According to Palmer, the computer age has spawned the ultimate “weapons of mass deception,” notably CGI, the mainstay of Hollywood blockbuster action films. “Audiences don’t realize the extent to which wildlife films contain digitally manipulated images,” he writes. “Animals in herds can be multiplied, blood can be added, roads and people can be erased and the gap between predator and prey reduced, increasing the market value of the film with higher ratings.” Palmer, a veteran producer, admits doing it himself. “For ‘Hurricane on the Bayou,’ we had extensive footage from before and after Katrina hit, but not from the heart of the storm,” he writes. “So, we used CGI effects to show the destruction of a water tower by 200 mph winds and pieces of roof blowing off the Superdome etc. Without CGI, the film wouldn’t have had the same emotional impact, but the danger lies in creating ‘realistic sequences’ that are complete fabrications.”

Palmer also commends filmmakers like Howard & Michelle Hall, Dereck & Beverly Joubert for promoting conservation and eschewing CGI and lower tech fakery. However, he and colleagues concede that the tide of technology may ultimately prevail. Palmer quotes Alix Tidmarsh, producer of Disney-BBC’s “Earth” series, “With advances in CGI it will be hard for filmmakers not to be tempted to fake some amazing scenes as competition increases.”