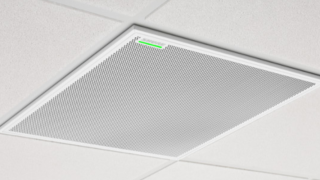 SALT LAKE CITY—Shure has been ruled to be in contempt of a preliminary injunction order regarding its MXA910-A microphone by the U.S. District Court of the Northern District of Illinois.

The preliminary injunction order was issued in August 2019 and prevented Shure from “manufacturing, marketing and selling the MXA910 in a way that encourages or allows integrators to install it in a drop-ceiling mounting configuration,” which would be in violation of a patent owned by ClearOne (U.S. Patent No. 9,813,806).

Shure released the MXA910-A in November 2019, claiming that the court ruled that the new model was not included under the preliminary injunction. The court disagreed, saying that Shure violated the order by allowing integrators to install the MXA910-A in the enjoined flush configuration.

The court has ordered Shure to no longer manufacture, market or sell the MXA910-A.

ClearOne voiced its support of the court’s decision and said that it will continue to pursue all available legal remedies to defend its patents from infringement.

Shure also provided a statement regarding the court's decision, saying that it disagrees with it but also sees positive aspects, specifically regarding the MXA910-US, which currently has a case pending with ClearOne over patent infringement.

"To be clear, the court's ruling is not a finding that the MXA910 infringes on ClearOne's '806 patent," said Shure in its statement. "Rather, the court ruling addresses compliance with the court's previous preliminary injunction order. Shure continues to believe it has not violated any ClearOne patents and that ClearOne's patents underlying this litigation are invalid. We look forward to presenting our case before a jury early next year and putting the matter to rest. As always, our top priority remains providing an uninterrupted supply of innovative products to ourc customers."

This story has been updated to include the statement from Shure.