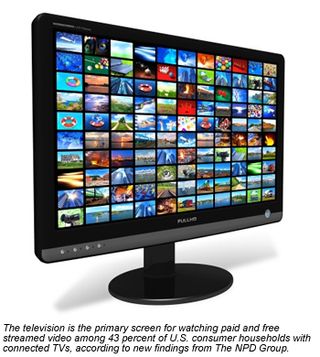 U.S. consumers over the past year are increasingly turning to their television set as their primary screen for viewing OTT streamed video content, while the percentage of those who say the PC is their top source has fallen, according to new figures from The NPD Group.

Findings in NPD’s “Digital Video Outlook” revealed the percentage of consumers who say the TV is their primary screen for watching paid and free streamed video has climbed from 33 percent to 45 percent while those who identify the PC as their main source dropped from 48 percent to 31 percent.

“The growth in connected TVs is another sign that online video is maturing,” said Russ Crupnick, senior VP of industry analysis for The NPD Group. “Streaming video has moved from the dorm room to the living room, and as more households obtain and connect TVs to the Web, we predict increased trial and engagement for video distribution services.”

Among connected TV households viewing streamed content, Netflix topped the list of sources with 40 percent using their TVs to access content; HuluPlus ranked second at 12 percent, and Vudu occupied third place at 4 percent, according to The NPD Group.