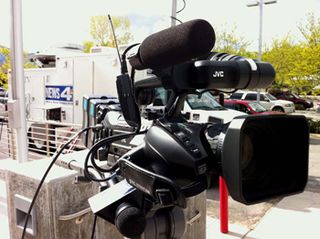 WAYNE, N.J.: JVC has announced that Reno, Nev. Television station KRNV is now using JVC GY-HM790U ProHD camcorders in its ENG and creative services areas. The station purchased a total of 14 HM790Us which were delivered in April, with most already in use.

“We needed a camera that wasn’t too large, wasn’t too small,” said Jeff Deitch, the station’s chief photographer. “This one fit the niche. I think it’s a great camera.”

The new cameras are equipped with Fujinon 17x lenses and each reporter is supplied two 32 GB SDHC memory cards for content storage, which the station has found to be sufficient for a full day’s worth of normal news gathering activities. The .MP4 files produced by the camera are edited with Grass Valley Edius systems.

KRNV is owned by Intermountain West Communications, which is based in Las Vegas, Nev.