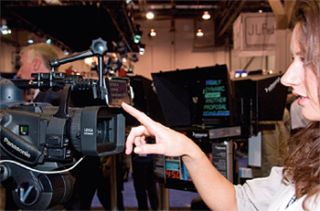 SAN FRANCISCO
Ubiquitous as they are, it's not surprising that consumer technologies—the Apple iPhone among them—have begun to encroach on the realm of professional broadcast production.

What may be a tad surprising is how quickly some of those applications have made their way to the broadcast market, bypassing the often-laborious process of R&D and precise nature of standards development to go from a simple marketing idea to a sellable product sitting on the show floor at a convention like NAB.

That's just what has happened in the prompting arena. Known as a workhorse that works efficiently through nearly every local and national newscast, the teleprompter has served as an essential but fairly quiet piece of the newsroom lineup. Now, a number of prompting companies have introduced teleprompters that incorporate iPhone and iPad devices instead of standard LCD or computer screens—which some in the industry see as a promising development, and others view with a some skepticism.

Autocue (L), and Prompter People introduced their own versions of an iPad prompting system at NAB in April. More than one source wondered about the "gimmick factor" of the setup, and whether this new prompting configuration can serve as a versatile-enough technology with the crystal-clear clarity and long-term readability to survive as a high-end prompting solution day after day.

What is undeniable is that these prompting solutions are garnering a great deal of attention.

From the first showing, the new product was "a real attention getter," said Richard Satchell, business development director for Autocue/QTV in New York. "There was huge interest, especially since [at the time, the iPhone] was a very new product." Satchell is referinng to an iPhone-based teleprompting solution the company introduced at last year's IBC, followed by an iPad version at NAB.

"We saw an opportunity to build on the popularity of Apple technologies, and found that [these technologies] were allowing us to reach a much larger market," he said. Since then, the company has seen a regular stream of interest both in the domestic and European markets.

A number of local news stations have already adopted the technology, ranging from NBC Universal—whose Access Hollywood program will be using an iPad prompter—to local stations like Barrington Broadcasting owned WFXL-TV in Albany, Ga. According to WFXL, using an iPad prompting solution will save the station thousands of dollars in paper costs each month, and foster a greater sense of connectivity.

Another reason for the technology's success and relatively quick market availability has been the ease of adapting the iPhone and iPad into traditional teleprompting solutions. "We were able to adopt our existing products quite easily," Satchell said, similar to the transformation teleprompting technologies underwent when notebook computers were revamped into flat-panel prompters. Autocue has since introduced three iPhone/iPad prompting technologies, including 7-, 10- and 17-inch versions. All solutions are targeted toward small production and AV companies, as well as education, corporate and government institutions.

Is there a concern over an influx of consumer-based technologies into the traditional high-end broadcast space? For Satchell, there's no obvious downside to the adoption of technologies like the iPhone into the professional broadcast arena. "It's been a positive revolution," he said.

Market demand has also opened up for Prompter People, which launched teleprompter rigs for both the iPhone and iPad at the 2010 NAB Show. The firm has shipped more than 100 iPad prompter solutions in the last few weeks, due in part to the technology's relatively low cost, the company said. Its iPad Teleprompter is readable to over 12 feet and is designed to accommodate large and small cameras on the prompter sled. Users can control the iPad via a separate controller or an iPhone, depending on software.

There is a significant convenience and familiarity benefit to iPad users of being able to edit their script on the iPad, and then put it straight onto a teleprompter sled to start prompting, said Cian de Buitléir, director of marketing for Prompter People in Campbell, Calif.

But the technology isn't a cure-all. No matter the teleprompting manufacturer, iPad's small screen size will effectively limit presentations to within 12 feet of the camera, and editing on the fly is not an option—users will need to remove the iPad to change the script content.

"Using the iPad model, you cannot edit scripts as easily during quick shoot breaks, you are limited to less than 12 feet distance from the camera, and speed controllers are only starting to become available," de Buitléir said.

Charlotte Latham shows off the new Autoscript prompter app for iPad and iPhone iTouch at the 2010 NAB Show. de Buitléir doesn't see the rise in interest in iPhone and iPad prompter technologies as a threat to traditional prompting gear. "Will the emergence of iPads for prompting hurt prompter makers? No, you can't use it without a prompter rig, and [prompting companies] manufacture those," he said. "A potential user of an iPad solution for prompting would be very unlikely to spend [up to a thousand dollars] on a standard teleprompter. It's a different user base."

Likewise, smaller firms bridging the consumer and professional divide are introducing iPad solutions, such as Bodelin Technologies, which introduced the mobile teleprompter ProPrompter HDi at NAB, designed for field reporting.

Still, some in the industry say it remains to be seen whether using an iPad or iPhone within a prompting solution is more than a simple gimmick. Does it offer major long-term benefits over a standard teleprompter? Is the screen bright enough to ensure clarity?

Those answers most likely depend on the goals of the end user.

"Aside from all claims of novelty and fads, iPad prompters unquestionably address one sorely underserved market need," de Buitléir said. "It's light, and it negates the need for a separate computer, so when you combine a lightweight prompter with an iPad, you finally have a portable teleprompting solution that you may shoulder mount for extended periods."

What is clear is that there is a strong interest in incorporating consumer products like Apple's iPhone into the infrastructure of a professional broadcast facility.

And prompting isn't the only bandwagon in the parade. At NAB, among others, mobile technology was introduced by HaiVision to provide control over video recording and publishing, and Aspera introduced an application for the iPhone and iPad that allows for high-speed file transport over mobile devices.