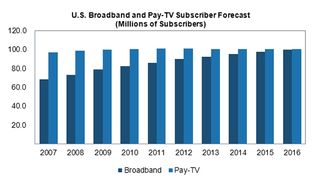 TV Everywhere services are the key to the future success of U.S. cable and satellite television businesses as the number of broadband customers rises to the same level as pay TV subscribers, according to the IHS Screen Digest service at information and analytics provider IHS.

“Based on our continuing analysis of TV Everywhere and OTT services like Netflix, it’s clear that the U.S. pay TV industry has reached a historic juncture,” said Tom Adams, IHS director and principal analyst for U.S. media research.

Cable and satellite TV operators face the challenge increasingly greater penetration of broadband among U.S. consumers. According to IHS, in 2016, U.S. broadband connections will expand to 99.9 million, which will compare to 100.4 million combined subscribers for cable, satellite and telco TV operators.

“Neither print nor audio media have been able to properly capitalize on — or even just withstand — the Internet juggernaut. So, the key question for U.S. pay TV operators in the years ahead is: Will TV Everywhere keep customers coming to them, rather than to their OTT competitors, for video entertainment?” said Adams.

Adams will present at 3:30 p.m. Jan. 10 at the 2013 International CES in Las Vegas. His presentation, “TV Everywhere: Who’s Making What Content Available Where?” will examine the battle between U.S. pay TV operators and OTT services amid increasing broadband subscriptions.

“The battle between pay TV and OTT will be the key media competition of the decade ahead, just as the battle between the open Internet and proprietary services like AOL defined the mid-90s,” said Adams. “The Internet is now fully video-enabled. Do pay TV operators have the right stuff with TV Everywhere to remain the dominant players in delivering video entertainment in the digital age? That’s what we’ll assess at CES this year.”