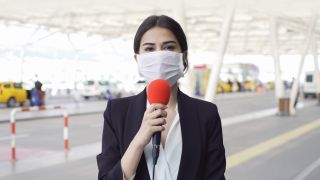 As the coronavirus has literally brought daily life to a halt worldwide, forcing people indoors, viewers are turning to television, with viewership rates skyrocketing. Like 9/11, this crisis has brought television to the forefront as people use the medium to stay up to date on the latest developments and entertain themselves to relieve the boredom and uncertainty.

The cancellation of the NAB Show is just one of many factors that will impact our industry in the coming months. With the Olympics and live sports and events postponed, programmers are scrambling to fill the gaps. And the health of TV production crews is also at stake.

TV Technology sat down with Rick Ducey and Mark Fratrik with BIA to discuss how these events are impacting our industry. This conversation was conducted in late March. Here is an edited transcript.

TV Technology: You’re in the business of assessing the state of the media business. Before the impact of the pandemic was realized in the past month, what was your original outlook for local television in 2020?

Mark Fratrik: It was around $17 billion for over-the-air advertising for local television stations. We generally don’t make estimates on network revenues. I think it’ll go down to around $16.2-$16 billion, and actually that’s not bad given how other local media are going to do. A lot of that continued strength is because of political advertising.

But whenever you’re talking about the full year, you have to make some assumptions about how quick the recovery will be. And we believe that it will be a strong recovery in the second half of the year. Maybe not starting exactly in Q3, but sometime in that period.

A lot of businesses that have severely lost sales will try and make up for it in the second half of the year. So, we think we’ll see a real flurry of advertising for the verticals that have been especially hard hit.

Rick Ducey: Clearly the revenue side is going to get squeezed in, moderately predictable and perhaps unpredictable, ways. But, basically, the demand side has shifted—restaurants, travel, hotels, airlines, things like that, don’t have the revenue base to support advertising. So there are some sector-specific things that’ll get hit.

Because of the pandemic, production schedules have shifted. So original cottent, movies, TV series are getting pushed out. Companies have their own revenues impacting negatively, so they’re shifting their advertising behavior. In some cases they’re suspending it. Some of the major car OEMs are pushing April campaigns into May and June. They’re still keeping that spend, just pushing it out a bit.

TVT: Well I think you can certainly tell, just by watching television, how the types of ads have changed. You don’t see the travel or airlines advertising anymore.

MF: If people are holed up at home, it doesn’t make sense to have an advertisement for Macy’s. And then there’s the restaurants—obviously, many of them getting by with takeouts, But, certainly, not as much advertising as there was before.

RD: In some cases, you see a brand, say Coke, they’re changing their creative out. So instead of saying, ‘Drink more Coke,’ they’re running PSAs. So some of the brands are saying, ‘Let’s take the high road here and let’s be part of the community. Let’s come together.’

TVT: What has the loss of live sports and events had on local television?

MF: Obviously local stations carry a lot of local sports, and they carry the network sports programming, so the lack of live sports programming has had a big impact on local television stations. Especially the types of advertisers, as well as the overall economic impact.

MF: That obviously affects the networks incredibly, so they’re going to take a big hit. Hopefully, they will be held in 2021, which wouldn’t be so bad for local stations because they won’t have the added benefit of political next year. So having an Olympics in 2021 might actually be decent.

TVT: With much of the world’s citizens cooped up at home now, how is this impacting the overall health of the industry, particularly in the area of premium video and OTT?

RD: What advertisers are buying now are impressions. They’re not buying shows so much. The OTT guys are going crazy, because they’re saying, “this is awesome!” So when people are buying premium video inventory, what you’re really doing is buying audience targets. And nobody does audience targets better than OTT.

TVT: Obviously people are watching more television right now, they want more news to stay up to date and entertainment to take their minds off of current events. So what you’re saying is that the revenue outlook is not as bad for broadcasters, but it’s only in the sense that the types of advertisers are changing. And maybe they’re not spending as much money? Is that too simplified?

MF: I don’t think it’s too simplified, I think it’s true. And again let’s not forget about political—that’s too big of a chunk for local television stations. Advertising will start over the next few months, and certainly through August and September and October, it’s really going to be overwhelming in some states. There are going to be a lot of competitive Senate and Gubernatorial races.

TVT: Do you think this pandemic will have any impact on the rollout of NextGen TV?

RD: As TV stations have their revenue impacted as uncertainty increases, they may want—to use a business cliche—“keep their powder dry.” So you see major TV groups that have wonderful cash flow, and good balance sheet positions, going to their credit lines and taking some cash out, because they don’t know. So I’d rather have the cash on hand and be able to meet payroll and obligations quickly, in case this gets worse and really bad stuff happens.

As they make calls on the credit lines, they’re obviously, potentially, increasing their leverage a little bit. So they’re going to watch the expense side. And the expense side includes things like engineering and IT projects—one of which, typically, is going to be ATSC 3.0 and all the related purchasing that goes along with the actual IT engineering infrastructure: new hires, you need new people with different kinds of expertise. So the station groups will focus more on managing margins. Having the ability to have cash flow through a period of crisis is going to cause them to suspend some major projects. And one of those projects, probably, will be 3.0.

3.0 is a very broad and deep topic. It’s not just sticking in exciters and connecting a new broadcast chain to the system. It also implies outcomes for production. So you need to acquire 4K production equipment and post-production equipment. And then need to do productions in that format. Those are all operating expenses, capital expenses. And you need to have people with expertise to operate those systems, so it’s kind of ‘first order effect,’ ‘second order’ and ‘third order effects.’ 3.0 is an industry unto itself.

TVT: What kind of impact is this all having on local broadcasters in regards to their day-to-day operations?

RD: The underlying technology infrastructure of local TV stations has changed significantly in the past generation. So we’ve moved a lot towards centralization, virtualized operation and microservices. I mean, you can be a chief engineer and run a lot of the operation out of your car, basically. There’s some things where you physically need to be there, but a significant amount of local TV stations have automated operations; they’re cloud-based, they’re virtualized, run by microservices.

The news people and ENG crews are putting themselves at risk being out in the front line which is literally a battle zone. So yeah wherever there’s human interface with other humans, that increases everybody’s risk. At a moment when people are at home in self-imposed isolation trying to understand what’s going on in their communities, it’s these local news crews that keep them connected and informed by putting themselves in harm’s way. I think we’re all grateful for their professionalism and service.