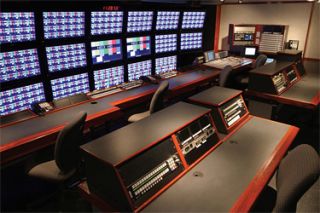 PITTSBURGH
It's autumn, which means college and NFL football, the baseball playoffs, the looming start-up of NBA and NHL contests—and a brand new busy season for sports production trucks.

Apart from the expected redesigns in animated graphics and on-screen sports widgets, the next-big-things a lot of the higher-end sports production vehicles have in common this autumn include quicker transition capabilities for optional live 3D, more HD camera rigs for both 2D and 3D at more remote sites, and further enhancements in super slow-motion camera work.

Pittsburgh-based NEP Productions is sporting two new 3D-capable mobile production vehicles—SS31 and SS32—which it says are the first of their kind in America. Both trucks are currently being heavily deployed for coverage of live HD and 3D events over the next several months. NEP's remote facilities are used by ESPN for "Monday Night Football," by NBC Sports for "Sunday Night Football" and Notre Dame home games, by Fox Sports for NFL Sunday games, and for a variety of regional sports events. Earlier this month, CBS used NEP's mobile resources to cover the US Open tennis grand slam event in 3D for the first time.

"One of the major challenges with live 3D over 2D [HD] is that 3D production requires so many more resources," said NEP 3D Engineering Manager Joe Signorino, "more people, more equipment, more everything." Logistically, NEP had three other 3D productions occurring around the country at the same time as the US Open. "3D is such an evolving technology��� you learn something new with each show, especially in the fast-paced environment of live television," Signorino added.

NEP's two 3D mobile trucks are deploying new Fusion3G 9901-UDX conversion units from Cobalt Digital for color correction, frame synchronization and up/down/cross conversion tasks. According to NEP Broadcasting CTO George Hoover, "From the viewer perspective, high-speed super-motion cameras from companies like i-Movix are becoming quite popular. From the technical end, the marketplace is rather stable at the moment, other than 3D. [We use] Canon lenses. And Grass Valley's Kayenne switcher and Calrec's Apollo and Artemis consoles are gaining traction in the production community."

As for HD production, Mike Werteen, NEP vice president of sales for U.S. mobile units, is excited about one development he thinks most HD viewers can appreciate: "This year a major NFL broadcaster is using the entire 16:9 frame [not ignoring the side panels], which will surely change the viewing experience and enable enhancements to use that 'entire canvas.'"

Joe Guarnieri, ESPN's manager of event operations facilities, said the sports network's biggest improvement is building the trucks with a 3G backbone. "This enables the trucks to also utilize 1080p, should that become a transmission norm," he said. "At this point, no one's in the position of transmitting 1080p or delivering to home viewers. [But] this is one way to future-proof the truck by equipping it with beefier routers and systems to handle potential increased signal flow."

As for "Monday Night Football," Guarnieri said ESPNHD is now broadcasting in 5.1 surround sound, "which is the biggest improvement from a truck standpoint. In college football, we're engaging 13 full-time trucks and we've swapped some new trucks in place of older ones. We've upgraded all the technology available to us."

Although Bexel provides mobile production units to the broadcast industry, Jerry Gepner, president of Bexel and CEO of the Vitec Group Services Division, underscores the point that, unlike NEP, "we're not a truck company—we're an equipment rental firm." Bexel's BBS1 53-foot truck was recently redesigned to function as a fully configurable production platform that can be set up on short notice for 2D or 3D for sports and an array of other production themes (i.e., talk or entertainment).

"BBS1 started life as an edit truck around 2003, and it was a good [facility]," Gepner said. "It was used at a lot of high-profile events. But we looked at it last year and decided it needed to evolve into the 'next thing.' It had a good reputation when it was a linear edit system—but we all saw what happened to linear edit systems. So we wanted to make the best use of BBS1's 'space.' Our current strategy is that 3D—that is to say, stereoscopic HD—is very exciting and a lot of people are very curious about it."

Scott Murray, Grass Valley's general manager of live production solutions, said another recent trend has been the addition of more super slow-motion replay capabilities because of viewer demand for high-quality SSM—and for the referees, who must review plays to ensure they get it right. Murray said SSM differs from traditional slow-motion (which uses a standard camera) because it deploys a 3X (180 fps) camera (model LDK 8300 for Grass Valley).

"Not only have we seen more trucks starting to incorporate SSM, but more trucks are increasing the number of SSM systems they use," Murray said. Besides a good SSM camera, quality slow-motion requires a server capable of handling high data rates and a replay controller capable of fast cueing, he said. (At Grass Valley, the combo server-and-replay-controller is dubbed a "K2 Dyno" Replay System.)

Game Creek Video recently built two 3D-capable HD trucks using Grass Valley Kayenne switchers. Murray said the two new Game Creek trucks are being used by ESPN and YES Network and likely will be used for the upcoming baseball playoffs. "If you need more production capabilities, you can always tie two trucks together, with one doing main production and the other, replays. And then there's NASCAR," Murray added, "which has been known to use up to 23 trucks for a single race!"