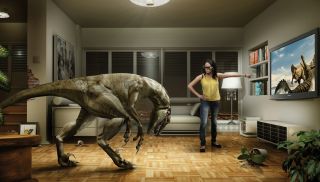 NEW YORK: The rest of the world, as measured by Nielsen, cares about 3DTV more than North Americans do. The audience measurement firm pinged 27,000 online consumers around the world in September, and found folks in Asia, Latin America, and the MEAP region--Middle East, Africa and Pakistan--were most excited about the stereoscopic medium.

Only 3 percent of those in North America said they “definitely will” versus 59 percent who said, “definitely not.” Two percent said they already owned a 3DTV set, the lowest among five regional calculations and half of the global average. (Contrary to the recent findings of an Omaha, Neb., research firm, which focused on the United States.) Ownership was highest in the MEAP region at 8 percent. Latin America came in at 5 percent. Global average was 4 percent.

“Our research shows that, despite positive perceptions towards 3DTV programming, consumers are still hesitant to invest in 3DTV sets--opting to take a ‘wait and see’ approach,” said Nielsen’s Frank Stagliano. “Recent technology battles between plasma and LCD or blu-ray and HD DVDs have trained consumers to wait until widespread adoption is more likely. This drives down cost, making technology more affordable.”

Nielsen included input from Dave Poltrack, chief researcher at CBS. He noted that for 3D to gain a widespread foothold, it will have to be considered complementary to 2D.

“No one has taken the really powerful TV dramas and made them with the eye toward 3D,” Poltrack said. “I think once that happens, you’re going to see regular television programming capturing [and] being enhanced by 3D, and people are going to watch special episodes of their favorite programs in 3D.”

For more, see Nielsen’s “Purchase Intent for 3DTV Varies Around the Globe.”