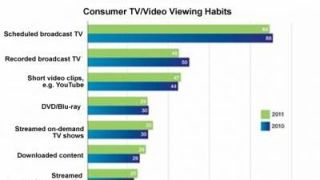 “TV and video have not been negatively affected by the Internet in the same way that print has; we just watch TV in many more ways than we did before,” said Anders Erlandsson, senior advisor at Ericsson ConsumerLab.

Social media usage has made an impact on how people watch TV as well, according to the study. More than 40 percent of the respondents reported using social media on various devices, such as smartphones and tablets while watching TV.

In terms of what consumers want most from their TVs, good quality remains the top factor and is more important than, for example, the availability of 3D TV and access to applications, the survey found. The service consumers are most willing to pay for is getting movies that are still running in movie theaters.