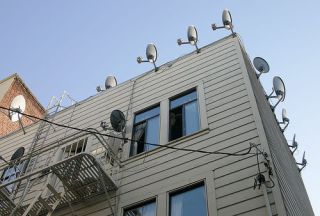 The legislation, passed in the spring, allows DBS operators to provide out-of-market broadcast signals to households that can’t receive in-market ones over the air. The FCC determines which stations and which households qualify for such out-of-market provision.

Viewership is one primary consideration. Out-of-market network-affiliated TV stations that are “significantly viewed” over the air are eligible for DBS carriage. However, under the previous SV rule, DBS operators could only carry an out-of-market network affiliate if they also carried the in-market affiliate. The new FCC rules eliminated the duplication over the objection of broadcasters, fearful that in-market stations would be booted.

The FCC agreed with satellite providers who said out-of-market stations typically were not significantly viewed throughout an entire market, but rather in parts of it. The commission’s attorneys said they found it “unlikely that an SV station could permanently substitute for an in-market station to the satisfaction of subscribers throughout the market.”

Today’s rules also eliminated the requirement that in-market stations receive the same bandwidth allocation as SV stations. The rules allow DBS operators to carry an SV station in high-definition as long as they do so for a legally and technically available in-market affiliate transmitting in HD.

The term “available” was a point of contention with the broadcast lobbies weighing in on the rules during the proposal phase. Broadcasters argued the carriage determinant be predicated on in-market signals “transmitted” or “broadcast” in HD. The commission didn’t bite. Determinant in-market TV stations have to elect either must-carry or retransmission consent under good-faith negotiations, and provide a “good quality HD signal” to DBS operator’s receive site.

“We acknowledge that this interpretation may affect retransmission consent negotiations in some situations by giving a satellite carrier the opportunity to provide network programming to some subscribers through the SV station,” the commission’s ruling stated. “This interpretation may also affect the local station’s leverage in negotiations because in certain areas of the DMA it would no longer be the only source of programming from that network to some satellite subscribers. We conclude, however, that this is the best interpretation of the statutory language because it ensures that the overall intent of the statutory provisions to promote SV carriage is carried out.”

Today’s rules also cover procedures for measuring the strength of digital broadcast TV signals. Signal strength is another factor in determining which households qualify for provision of SV signals. If a household can demonstrate that it can’t receive a given in-market station over the air with an outdoor antenna, it qualifies for an SV one.

The commission said it adopted a new digital Individual Location Longley-Rice model to predict signal strength. The digital Longley-Rice is based on the one previously used for analog signals, which has been known to produce inaccuracies and anomalies for DTV. The FCC consequently is seeking corrective measures. Comments on modifying the ILLR will be solicited via a Further Notice of Proposed Rulemaking.

A separate ruling defines conditions at receiving households, such as qualifying antenna types, heights, locations and so forth. This set of rules prohibits signal strength measurements during inclement weather.

In addition to the three rulings laying out STELA procedures, the FCC issued a Public Notice seeking comment on a related reporting requirement. The report is intended to determine the number of SV qualifying households in each market, and the number that receive local in-market affiliates. The Notice seeks comment on whether to continue using Designated Market Area boundaries to determine in-market stations, or to come up with something else.