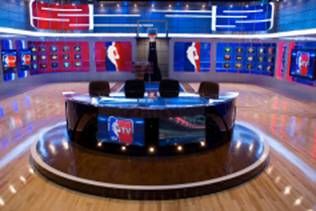 ATLANTA–NBA Digital will unveil a new TV studio and updated online and mobile capabilities in time for the new season.

Representing the NBA’s portfolio of digital assets and managed by Turner Sports as well as the NBA, the company achieved double-digit growth across all its media platforms last year, hopes to continue the growth with the introduction of a new TV studio, a redesigned NBA.com home page and new mobile sites for NBA.com as well as all 30 basketball teams.

The TV studio will be the home for NBA-specific content shows like “Game Time,” “Fan Night,” “The Jump,” “The Beat” and “Fantasy Insider” for the 24-hour network available in 60 million U.S. households. Its new 5,000 square-foot studio will be outfitted with 13 monitors including a 65-inch touch screen. Probably its most unique feature will be its authentic hardwood court surface, covering the entire studio, and including a regulation as well as a half-court demonstration area.

View a time-lapse video of the studio redesign here.

The revamped home page will feature expanded video and social functionality. Fans will be able to access six video channels straight from the home page and customize their website navigation according to their prioritized features.

“We’re excited to enhance the fan experience across all of our platforms,” said Christina Miller, senior vice president and general manager of NBA Digital. “NBA Digital is coming off a record-setting season, and we continue to evolve our products to meet the needs of our passionate fans.”