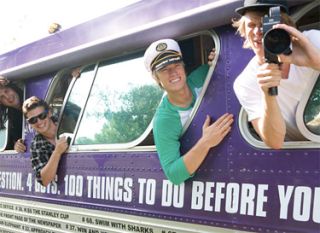 MTV’s ‘The Buried Life’ stars (L-R), Ben Nemtin, Dave Lingwood, Duncan Penn and Jonnie Penn
UNIVERSAL CITY, CALIF. — “The Buried Life,” a reality TV series now in its second season on MTV, is a sort of “bucket list” for the millennial generation. First introduced solely online four years ago as an independently produced documentary featuring four Canadian university students, the weekly series has set out to accomplish 100 things to do in life before said bucket is kicked.

Mike Powers, the show’s executive-in-charge at MTV, said new, compact types of HD cams with acceptable quality such as consumer-grade Flip devices allow access to places not easily penetrated by bulkier equipment. “The guys can remain as stealth as possible,” he said. “Much of the show is completely unplanned, so it’s great that they can get decent coverage just by pulling out a tiny camera these days and start to shoot instantaneously.”

The series’ transition in 2009 from online to cable on MTV was not difficult, said Powers. “’Buried Life’ was born on the Internet, so if anything, the guys had to somewhat adjust their way of working to start creating full half-hour episodes and, of course, begin tell longer stories.” The series title is taken from a 19th century poem of the same name by Matthew Arnold.

The amusing bucket-list goals thus far achieved in the series (i.e., shooting hoops with Barack Obama, stealing a lock of hair from a certain vampire actor) are coupled with the gravitas of genuine good deeds—such as helping estranged family members reunite and providing mostly online forums of support for young viewers dealing with such issues as school bullying and thoughts of suicide.

Post Production Supervisor David Tomlin of Reveille Studios in Universal City, Calif., said one of the more challenging aspects of post-producing “The Buried Life” is dealing with its many required formats. “Due to the ‘docu-drama’ nature of the series, we try to shoot as discretely as possible, and we use many different types of cameras to achieve this goal. Our primary HDV cameras are the Sony HVR-Z7U’s,” which Tomlin said were tapped for their handheld portability and image quality.

“We can mic it, capture great color, be discreet when needed, and make quick adjustments on the fly. However, we’re also using digital Flip Mino HD cameras, various ‘hidden’ mini-file based cameras—and even some 16mm film which we shoot using a wind-up Krasnagorsk-3,” Tomlin said. (The Krasnagorsk was made in the former Soviet Union.)

Jonnie Penn in the editing suite Tomlin said bringing all these formats to post has been streamlined into a single workflow, now that the series is into its second season on MTV. “We shot both seasons in 1080i [although] this is our first year broadcasting in HD domestically. For a reality show, we put a lot of care into how we compose shots and this show was always meant to air in HD, so we’re very happy the audience now gets to see what we’ve been seeing [on MTV HD],” Tomlin said.

The show is edited on Avid Nitris I/O. “We lay all file-based footage to HDV using a Sony HVR1500-A, and then digitize it at a 10:1m resolution,” Tomlin said. “Once our edit is complete, we up-res in-house, then send out a textless VAM for DaVinci color correction. From there we add titles, effects, and blurs using a Symphony Nitris, and finally, we lay to HD cam—which we use as a dub master for final delivery.”

Adam Paul, Reveille’s executive producer on the series, said each episode presents different technical questions. “The bottom line is we try to tell a great story and give the viewer an up-close and personal feel without it feeling like the viewer is intruding on the moment,” Paul said. “When the boys once tried to escape from a deserted island, we gave them a night-vision camera they could shoot themselves, and another camera with an underwater case. [Regular] HD Flip cameras are heavily used, too. We get away with a variety of camera looks because we’re okay with footage feeling ‘user-generated.’ It basically keeps it real.”