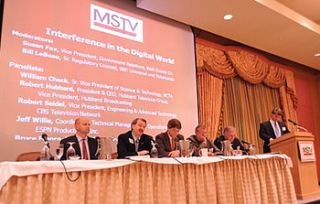 Last week's annual Maximum Service Television conference wasn't all sweetness and light about how well the DTV transition is rolling along.

While that topic was at the forefront of the Washington event, the "I" word was indeed a big part of the discourse saved for late in the schedule of events Monday (Sept. 22).

Panelists in the "Interference in the Digital World" discussion didn't tiptoe around the ever-growing concerns about the potential encroachment of television broadcast spectrum "white spaces" by as-yet-undeveloped devices.

With Walt Disney's Susan Fox and NBC Universal's Bill LeBeau moderating, William Check of the National Cable and Telecommunications Association, Robert Hubbard of Hubbard Broadcasting; Bob Seidel of CBS; Jeff Wills of ESPN and Bruce Franca of MSTV all took turns bashing the not-so-good idea of parking unlicensed devices in the middle of the parking spaces reserved for broadcasters.

The panel on white space at the Sept. 22 MSTV conference. "This one takes the cake," said Hubbard, as the words began to fly. "We've been put in the unenviable position of having to prove a negative in a case where science and technology engineering test data shows that there is clearly a problem. When all those tests are done, somehow the broadcast industry is still painted as being just objectionable or just looking to stop something when the truth of the matter is we're trying to protect the American public's ability to receive television. To me this is a terribly frustrating experience."

"I think unlicensed devices are especially insidious because interference comes and it goes," said Seidel. "Tracking down who is interfering with you is impossible."

Seidel stated that as there are no rules or regulations specifying how well television receivers should be built in terms of rejecting interfering sources, there is the potential for a lot of problems in terms of obtaining satisfactory reception in the presence of unlicensed devices.

"As more and more of these devices get into the market, the noise floor tends to go up," Seidel said "What's going to happen is you're going to lose your reception. It desensitizes the receiver."

The potential for interfering with wireless mics was not neglected either.

ESPN's Willis said that in the presence of unlicensed device interference, fallout from jamming of wireless mic signals is not just a local or national problem.

"This is not just a local thing," Willis said. "This information also goes to our other platforms—ESPN International. Our affiliates take this microphone sound that puts out in our broadcasts and mixes it into their broadcasts as well. So the potential for interference is worldwide for us."

Willis also questioned the ability of sensing technology to properly identify potential white spaces that could be used for unlicensed device transmissions.

"It was pretty much a failure," Willis said in referring to recent industry tests done at FedEx Field outside Washington. "I would have to say that the [sensing] technology is just not there."

The cable industry is on guard also, pointing out that there are no white spaces when it comes to CATV systems.

"We think that there are 120 million analog cable-ready television sets around the country today and there are digital-ready cable sets on top of that," said the NCTA's Check. "That's a lot of potential for interference. There have been various proposals and policies on how to use the white space spectrum; they have not addressed this direct pickup interference to cable."

The possibility of using wireless mic "beacons" to flag white space devices of spectrum being used legally by broadcasters has been considered recently and the panelists were asked for their opinions of this technology.