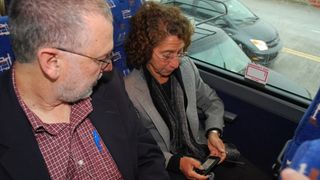 On Sept. 20, the Open Mobile Video Coalition (OMVC), the group promoting Mobile DTV in the U.S., held an all-industry event for members of Congress, Administration officials and others in Washington, D.C. to celebrate the “commercial launch” of the technology and demonstrate nascent devices that can receive the over-the-air broadcasts.

The gathering appeared to be more ceremony than substance, as Mobile DTV has been technically available in some markets for the past year but has found few takers among paying consumers. A similar event showcasing the technology was hosted on Capitol Hill in 2009 (July 28) and a field trial in August of last year. Other tests have been conducted in Atlanta, Seattle, San Francisco and Dallas/Houston, with varying degrees of success (depending upon topology).

With some 130 stations now on the air in 50 U.S. markets, according to the OMVC, Mobile TV is now (theoretically) available to half of Americans. The nation's third largest Telco, MetroPCS, is offering service and a cell phone from Samsung that includes an integrated ACTS-compatible Mobile DTV receiver chip inside.

The event, dubbed “Never Miss A Minute,” was presented by the OMVC and its two splinter groups: the Mobile Content Venture (MCV) and the Mobile 500 Alliance. It included a few presentations and several live demonstrations of compatible portable devices receiving siganls from local TV stations. The devices on display featured a Samsung Galaxy S Lightray smartphone, some external dongles (for laptops and electronic tablets) and a small Kenwood portable television, whcih can all receive the special broadcasts. All of the devices carry the new “Dyle” and/or “My DTV” mobile DTV logos, which are designed to ensure consumers shopping at retail outlets that the specific devices can receive the mobile broadcasts.

These broadcasts are facilitated by special equipment that uses the same DTV bandwidth stations already used for their HDTV broadcasts. About 3Mb/s to 5Mb/s of a station’s 19Mb/s is dedicated for Mobile DTV transmission.

The Mobile500 Alliance, whose members include more than 400 commercial and public TV broadcast stations, demonstrated its “My DTV” mobile television service. The group said the service would be available in Seattle and Minneapolis this fall, although some stations in these markets have already fired up their mobile DTV transmitters and are simulcasting their main HDTV channel.

“We are keenly focused on delivering broadcast television to mobile devices so consumers have television when they want it and where they want it,” said Colleen Brown, chair of the Mobile500 Alliance board of directors and president and CEO of Fisher Communications.

Thus far, the promise of premium live and on-demand content has not materialized, as content sharing deals are still being worked out. It is also hoped that Mobile TV will help deliver weather alerts and breaking news information to viewers, and the technology can also be applied to future alerting systems as they become available.

The Capitol Hill event also served as a showcase for the newly emerging Mobile Emergency Alert System (M-EAS) that goes far beyond today’s electronic text alerts for mobile devices, offering real‐time video, maps, photos and urgent information in the event of an emergency. On display were compatible units from LG Electronics and Harris Broadcast.

The M‐EAS is currently being standardized by the ATSC, which also developed the (A/153) Mobile Digital TV (aka, Mobile Handheld, or M/H) broadcast standard.

The event was hosted by the OMVC, the National Association of Broadcasters (NAB) and the Advanced Television Systems Committee (ATSC), and sponsored by tech vendors LG Electronics, Harris, Samsung, Elgato and Rentrak.