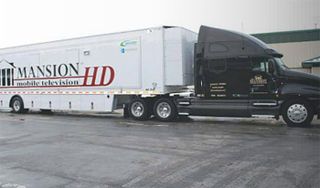 BRANSON, MO.
Versatility was the watchword for mobile production company Mansion Mobile Television when it came to designing its new flagship ME-2HD remote truck. Although sports television coverage was central to the truck's main audio design considerations, the company's affiliation with the Mansion Entertainment and Media Center also requires ME-2HD to handle music concerts and other entertainment events.

"We tried to build a truck that would fit our entertainment needs as well as our main bread and butter, which is sports production," said Brad Palmer, vice president of operations for Mansion Mobile Television. In addition to the truck servicing Mansion's venues in Branson and hiring out to other local area events, "We're also members of Alliance Productions out of Little Rock, Arkansas, and with Metro Sports out of Kansas City."

Brad Palmer, vice president of operations for Mansion Mobile, at the controls of the SSL C100 in the company's new ME-2HD truck The gestation period for the 53-foot expando truck was six months. "We started August 30 of '08 and rolled it out April 15, 2009," said Palmer. "We went through an integrator, Diversified Systems of Santa Clara, California—an amazing group of people."

The choice of mixing console—central to the design of any truck audio room—was informed by Mansion Entertainment's facilities, according to Palmer. "We have a recording studio at the Mansion that has an SSL 9000J in it, and we've had nothing but a superb relationship with SSL. One of the big considerations when it came to choosing an audio console for the truck was the sonic characteristics as well as the flexibility of the console. The SSL C100 that we have is patterned after the 9000J in its audio characteristics, so we knew exactly, sonically, what we were going to gain. It is very user friendly and sets up very quickly, and yet has the power to do just about anything that you need it to do. It's laid out much like an analog console, and feels a lot like an analog console. It's just very intuitive and very easy to learn."

The 56-fader digital audio broadcast console supports 128 analog and 96 AES inputs, with 96 AES and 72 analog outputs, all wired through an Nvision 256x256 router. Two SSL Delta Link MADI HD modules offer direct DAW connectivity for entertainment clients. Perhaps of most importance in a truck, where weight is a critical issue, SSL's stage boxes and microphone preamps may be remotely located and connected back to the truck over two lines of fiber. "That saves a whole lot of weight in copper and cable when it comes to cabling a concert venue," notes Palmer.

The flexibility of the C100, and especially the remote stage boxes, helps support the entertainment side of the venture, he notes. "When we're doing a concert we wanted this truck to not need the support of a separate audio truck."

Familiarity also drove the monitor speaker selection for ME-2HD. Mansion Entertainment's recording complex, plus a video edit suite, as well as ME-1, the truck's SD sister vehicle, all rely on Genelec monitors. The matching monitors allow projects to seamlessly translate between facilities, says Palmer: "They're one of the most transparent speakers you can get." Plus, he adds, "Their service has been impeccable."

Mansion Mobile Television debuted its ME-2HD at the 2009 NAB Show ME-2HD's Genelec bi-amplified active 8240A speakers are installed as a 5.1 surround system together with a Genelec 7260A subwoofer. A separate pair of 8030A monitors is included for pre-fade listen. Genelec's proprietary GLM (Genelec Loudspeaker Manager) software and AutoCal automated acoustical system-wide self-calibration algorithm help iron out any idiosyncrasies in the room.

"It's a truck, not a tuned studio room, so it's a challenging audio environment, and we get a number of engineers who come in and work in this space, depending on the event," says Palmer. "We wanted to give engineers the best possible environment to mix in, and the 8240's GLM software provides us with what we need to that end."

Too often, a remote truck's audio facilities are squeezed into limited floor area; not in ME-2HD. "I did audio for about 15 years so I was very sympathetic," said Palmer, who notes that the expando section extends through the audio room. "That gave us quite a bit of extra room in audio. This truck has probably more room in it than any production truck I've ever been in. We were able to put a little roll-around producers desk in there, which gives us room for the Pro Tools system if we're doing a multitrack event, and it also gives us room for the A2s to stage some of their equipment. It also gives the engineer plenty of room to mix and a good comfortable environment. We've had nothing but compliments from audio guys that have been in the truck."

With limited release options available for 5.1 music projects, the truck's surround mixing capabilities are principally designed for its sports clients. "We have five pre-season NFL games that will be done in 5.1, and we have a lot of Big 10 and Big 12 sports that will be done in 5.1," Palmer said. Mansion Mobile's client list includes the NBA, MLB, Major League Soccer, NCAA/Big 12 basketball and the NFL.

The onboard microphone complement—including Sennheiser ME-66, MKH-416-P48U3 and MKH-70-P48 shotguns, Electrovoice RE-50 and 635B handhelds, and Sony ECM77B lavaliers—is aimed squarely at sports clients. "On the entertainment side we leave the choice of mics up to the client; that way they can get exactly what they want," Palmer said. "And if we're doing anything at the Mansion we steal mics from the studio!"

The audio design turned out very well, he concludes, relating one special compliment: "Our studio engineer actually asked if he could come and mix a project in the truck. That's how well he thought it sounded."