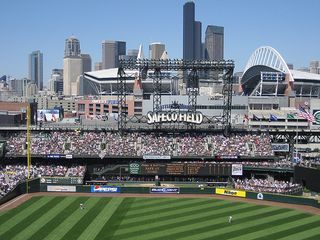 NEW YORK: The first-ever Major League Baseball games to be telecast in 3D are on deck. The YES Network, DirecTV and FSN Northwest are teaming up for 3D coverage of the face-off between the New York Yankees and the Seattle Mariners, July 10 and 11. Panasonic and DirecTV will sponsor the 3D feeds; and DirecTV will make it available to all of its HD customers who have 3DTV sets. It will also be available live to customers who live within the YES “home-team footprint,” including New York State, Connecticut, north and central New Jersey and northeast Pennsylvania.

The 3D telecasts will also air live within the FSN Northwest footprint, including the entire states of Washington, Oregon, Alaska and parts of Montana and Idaho. The Saturday, July 10 game telecast will begin at 10 p.m. ET, and the Sunday, July 11 game telecast will start at 4 p.m. ET. YES and FSN Northwest will both also produce their traditional 2D high-definition telecasts of both games.

(Image of Safeco Field by Rickie22)