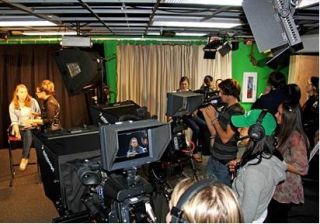 WAYNE, NJ–Baltimore’s Loyola University Maryland has completed a three-year transition to HD production for its Communication Department built around a variety of JVC ProHD cameras.

Loyola has one GY-HM150 and four GY-HM100 handheld ProHD camcorders, which are used for broadcast journalism courses and Film Club projects. Three GY-HM790 cameras, purchased last summer, are used mostly as studio cameras, while three GY-HM750 cameras, purchased in February 2012, are used as ENG cameras in advanced classes as well as for community service productions. The department is planning to purchase six more JVC cameras during the 2012-2013 school year.

“We were very impressed with the performance of the GY-HM790 camera in the studio and purchased additional GY-HM750 cameras for field productions,” explained Herbert Jay Dunmore, television operations manager. “The cameras are very user friendly, and the similarity of menu structure allows for a smooth transition between models.”

Dunmore, who teaches digital media courses and serves as engineer for the department, is also the advisor to GreyComm Studios, a student television production club. Students produce a variety of programs, including news, sports, and reality shows. The organization provides a cross-discipline collaborative experience in digital convergence media to help students “learn in a production environment they would experience post graduation,” he said.

Beyond the transition to HD production, Loyola also moved from Apple Final Cut Pro to Adobe and Avid NLE systems. “JVC’s dual recording formats and direct-to-edit ability were significant factors,” Dunmore noted. “The 35 Mbps recording ability is an added bonus for many of the community-based projects that require high quality imaging for archival and post. The dual-slot recording option in both the GY-HM750 and GY-HM150 allows for immediate editing and producer review in separate locations.”

Beyond the improved editing workflow, Dunmore said the dual recording feature of the GY-HM150 and GY-HM750 provides additional confidence in the field. Plus, the tapeless acquisition encourages students to use metadata and introduces them to basic asset management. “The JVC cameras have been the tools that allow us to move into different areas and see why they are important,” he added.

The HD upgrade of the studio and field production equipment was a top priority of the department. Student involvement and digital media course enrollment has grown by more than 30 percent over the last few years, and Dunmore said the new JVC cameras and other HD equipment have been a big part of the surge.