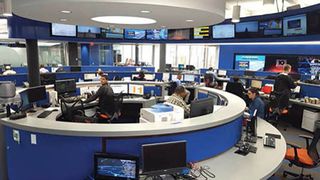 The death last week of Larry Edgeworth, a 25-year NBC News veteran audio technician, from COVID-19 not only underscores the serious nature of the disease in TV news, but also adds an element of urgency to planning going on in newsrooms around the country about how best to keep news personnel safe.

Telephone interviews with several broadcasters—large and small—over the past week revealed that a variety of steps are being taken in an effort to protect personnel and maintain news operations.

They include: when possible, sending staff home to work remotely; breaking newsroom personnel into small pods to limit interpersonal contact and possible exposure; distancing personnel from each other in the newsroom and on-set; limiting exposure of field reporters and photographers to newsroom personnel; deep cleaning of stations; regular wipe downs of keyboards, various production control surfaces, ENG camera controls and other surfaces with disinfecting wipes; use of old-school mic techniques; and frequently using internet technologies like Skype and Apple FaceTime in place of personal interviews with newsmakers and other sources.

Further, broadcasters also reported ongoing evaluation of longer term strategies, such as leveraging control room and master control automation, to address a range of possible eventualities, the worst of which includes an entire shutdown of a station building.

The rapid onset of the coronavirus in American society means newsrooms, just like the public at large, must evaluate new information as it becomes available and adjust their strategies for protecting staff and their overall operations accordingly.

“How it is impacting our day-to-day operations is a learning process we are still going through,” says Patrick McCreery, president of Meredith Local Media Group. “But I can tell you we are pushing the boundaries when it comes to using technology to help us through this process.”

For Meredith that means instructing reporters and photographers to not report to their local stations. Rather, they are being asked to access their Avid iNews NRCS remotely, rely on IP newsgathering backpacks and Dropbox to submit video.

Adjusting strategy to the realities of working during the outbreak and relying on technology to fill the gaps created by the contagion are key to the response from Sinclair Broadcast Group as well, says Sinclair Senior Vice President of News Scott Livingston.

“Many of our stations are right on the frontline of this outbreak,” he says. “There is a lot of uncertainty. The situation continues to change rapidly, and we continue to adjust our coverage plans and also our contingency plans.”

Among the adjustments is clamping down on studio guests. Rather than inviting newsmakers into its stations’ studios, the stations are turning to Apple FaceTime and Skype to conduct live interviews, he says.

Changes are happening in the field as well. Sinclair has inked an enterprise-wide deal with LiveU so that all employees have the LiveU app on their phones, greatly multiplying the group’s ability to go live from the field. Not only does the app give the broadcaster greater reach, it also means an individual can readily shoot news footage without requesting more station personnel to go into the field, thereby limiting possible exposure to the virus.

To further limit the possibility of exposure, Sinclair news-producing stations have stopped using lavalier mics but instead are using stick mics—frequently clamped to an object—to minimize how many people actually touch workaday gear, says Livingston.

In another move to limit exposure, news crews no longer share cars from a vehicle pool. Rather, individuals are assigned a vehicle that they take home and can use to drive to the scene of a story. Similarly, ENG trucks are being assigned to single individuals—all in an effort to isolate news personnel from one another and minimize potential interpersonal virus exposure, Livingston explains.

The outbreak has also affected how technology is used and a planned expansion at NewsNet, the Cadillac, Mich.-based free-to-air diginet news network that launched a little more than a year ago, says Eric Wotila, president of the new news network.

“We have greatly expanded our Skype and remote interview capabilities here so we can talk to people without sending anyone into the field and interview more relevant newsmakers right from our control room via Skype,” says Wotila.

NewsNet is also “fast-tracking” deployment of its Studio C because of its extensive remote interviewing capabilities, he adds.

The first thing Waterman Broadcasting in Fort Myers, Fla., did when it learned of the outbreak was to put sanitizing stations at every entrance of its buildings, says Bob Hannon, director of production.

Employees at its NBC affiliate, WBBH-TV, and ABC affiliate, WZVN-TV, which Waterman operates under an LMA, are also being instructed to wipe down their work surfaces several times a day with disinfectant. Similarly, frequently touched surfaces in the broadcaster’s production control rooms are being wiped down before and after each block of shows, and personnel in the room are instructed to disinfect their hands frequently with hand sanitizer, he says.

Reorganizing how things get done is important, too. The broadcaster has restricted all visitors, guests and deliveries and developed a plan to have up to 30% of its personnel—mostly traffic, sales and digital—work from home. At-risk employees with ongoing health concerns were sent home to work as well, he says.

Waterman has broken up newsroom and production teams into what Hannon describes as “workgroup pods.”

“We are looking at a situation where we have smaller groups instead of large groups,” he says. “So when an exposure happens—and that’s not a question of if—we are looking at possibly having to quarantine a smaller number than a larger number.”

Thorough, regular cleaning is important elsewhere, too. “Over the last week, we have fogged and/or done other similar types of deep cleaning at every facility,” says Meredith’s McCreery. “We did this because we knew we were going to be working, and we wanted to start with a new, clean, fresh slate.”

However, if cleaning and the other steps aren’t enough, other contingency plans are in place. If Meredith should be forced to shut down a building due to the outbreak, the first tier of defense is to run an umbilical from the building to a temporary work environment outside to control station operations while decontamination and cleaning are under way, says McCreery.

“Let’s take that one step further and say we can’t access the premises at all,” he says. “We do have the ability through remote control rooms in two of our facilities to switch and augment a newscast.”

In practice, that might mean running a newscast for Meredith’s WSMV-TV in Nashville, Tenn., from its hub in Phoenix. “I could actually utilize Nashville anchors and reporters via LiveU and bring them in and switch them with Nashville graphics out of my Phoenix hub,” says McCreery.

If one of Meredith’s hubs should have to be abandoned due to the virus, the broadcast group can continue to operate it remotely via the cloud. “So I can actually keep all of our stations on the air without actually having the physical hub in place,” he says. “It’s not ideal, and it would be messy—I can promise you that. But we can do it.”

Without question, the COVID-19 pandemic has so upended what was considered to be normal that some pundits are predicting a new normal will emerge when the pandemic passes in which there’s far more work from home and far less social interaction.

Local television news may not be immune to this turning either. Meredith’s McCreery likens the possible long-term impact of the pandemic on newsrooms to what happened coming out of the economic downturn 12 years ago.

“We needed something to shake our foundation, and that was the Great Recession of 2008,” he says. “That forced our hands into thinking proactively about using the technology that was available, and that’s what led to our hubs in the first place.”

Sinclair’s Livingston thinks the pandemic’s effect on newsrooms is already under way. “You look at it, and this outbreak is really accelerating the newsroom of the future,” he says. “We are using the technology at our fingertips, and it’s pushing us to be innovative.

“I think this is probably one of the most challenging situations folks will face in their professional careers. But together, we will help each other. We will leverage our strengths and resources to help all of our stations get through some difficult days ahead.”