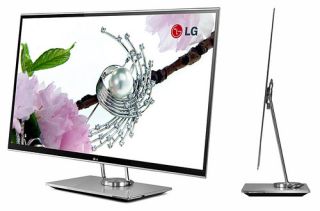 BERLIN: LG fired up the blogosphere with the debut of a prototype 31-inch organic light emitting diode 3D-capable television at the IFA electronics show in Berlin, which concludes today. At 31 inches, the screen is the largest OLED to be demonstrated in public, and possibly the thinnest, at less than one-third of a centimeter.

“LG’s OLED TVs dispense with the backlights used on conventional LCD models in favour of a film of pixels that actually produce their own light,” the Korean electronics maker said.

LG rolled out a 15.1-inch OLED for $2,500 last December, two years after Sony was the first to market an OLED TV in the form of its similarly priced 11-inch XEL-1. Sales of the XEL-1 were ceased in Japan earlier this year, though North American production continued. Sony revealed in May that it was working on super-flexible OLED displays, demonstrating a pocket-sized video screen that could be rolled up on a pencil.

The latest OLED from LG features 2D and 3D display capabilities--a first for the screen type. No release date nor suggested retail price were reported for the 31-inch model.
-- Deborah D. McAdams

See...
May 27, 2010: “Sony Unveils Rollable OLED Display”
Sony has revealed the most flexible video display yet. Its new ultra-thin organic light-emitting diode screen can be rolled up like a scroll.

February 16, 2010:& “Sony to End OLED TV Sales in Japan”
A company spokesman said it produced about 2,000 sets per month, and that demand in Japan had “run its course.”