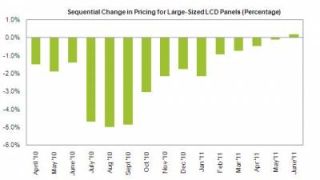 When the final tallies are in for the month of June, the price of large-sized liquid crystal display panels used in televisions and other products will see a slight increase, according to new research from IHS iSuppli.

The price of large-panel LCD used in TVs, monitors and notebook computers was expected to rise 0.2 percent despite a fragile consumer market. A new report from IHS iSuppli, “Large-Sized LCD Panel Market Anticipates Only Minor Price Hike,” the increase is the result of growing demand from companies rebuilding inventories to defend against supply disruptions stemming from the disaster in Japan. The increase in price is the first for LCD displays used in all three consumer products since April 2010.

For June, all three applications for LCDs are expected to post slight increases, rising 0.1 percent for desktop PC monitors, 0.2 percent for televisions and 0.5 percent for notebooks.

Despite feeble end-market demand in June for televisions and other products using large-sized liquid crystal display (LCD) panels, the slight increase in overall LCD pricing is expected for the month as companies rebuild their inventories to serve as insurance against supply disruptions related to the Japan disaster, according to new research.

“Consumer demand for the major products using LCD panels, like televisions and computers, remains weak, especially in the United States and Europe,” said Sweta Dash, senior director for liquid crystal displays at IHS. “Despite this alarming sales situation, pricing is on the rise for all of the major LCD applications with panel buyers replenishing their stockpiles in order to build buffer inventory, in case of further supply disruptions spurred by the Japan disaster, and as panel suppliers reduced utilization rates to control production. This is driving up pricing for panels in all major applications.”

According to IHS iSuppli, some major brands continue to report high channel inventory. This prevented the price increases from rising higher in June and kept them at moderate levels during the month.