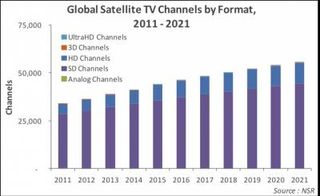 The UltraHD industry is in need of market champions to develop the ecosystem as uncertain market acceptance and revenue potential has led to a lingering hesitation in investments to promote the platform, said a new analyst report from NSR (Northern Sky Research in Cambridge, MA).

It’s expected that the most likely regions of the world where Ultra HD will be most successful are North America, Western Europe and East Asia — where the wealthiest households, in terms of disposable income levels and pay-TV households are congregated, according to Jose Del Rosario, a communications analyst for NSR.

On the heels of Eutelsat’s initiative late last year in deploying the first 4K TV channel for experimental and demonstration purposes, Reuters reported in January 2013, that the Japanese government is set to launch the world’s first 4K TV broadcast in July 2014, roughly two years ahead of schedule, to help stir demand for UltraHD TV sets.

The service will begin from communications satellites, followed by satellite broadcasting and ground digital broadcasting. Japan is likewise looking to develop super high-definition 8K TVs where the Ministry of Internal Affairs and Communications plans to launch the test 8K TV broadcast in 2016.

Del Rosario noted that the Japanese initiatives are government-led, aimed at boosting the country’s consumer electronics sector, which accounts for a relatively large share of the country’s GNP. Second and more importantly, he wrote, the initiatives being government-backed may not necessarily address or be in sync with pure market dynamics such that their impact may or may not work in boosting the UltraHD proposition.

In NSR’s view, he said the government initiatives on the supply side would have some positive effect on the ecosystem. Developments in next-generation compression standards, which in NSR’s view is one of the most important to truly jumpstart the market, should proceed at a faster rate.

However, the level of impact will likely be relatively minimal as the market economics or “free market” economics affecting the demand side cannot be changed dramatically by these initiatives. Unless the government directly provides incentives such as direct subsidies towards the purchase of UltraHD TV sets that lowers the price of UltraHD TVs (which incidentally could lead to “anti-dumping” measures when applied to the export sector) the above mentioned supply-side measures would have little overall impact on demand.

As such, UltraHD will remain a niche proposition accounting for a relatively small share of the globe’s total channel count, which should continue to be dominated by SD and HD channels. UltraHD due to expected high costs associated with bandwidth requirements, as well as outlays from customers in the form of highly expensive UltraHD TV sets and added service costs for content bouquets, are longstanding issues that should continue to restrain investments in UltraHD from content providers, as well as service providers in the cable TV, DTH and IPTV camps.