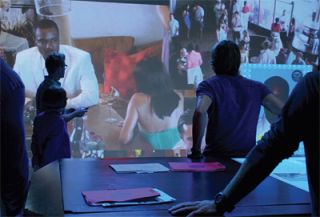 HOLLYWOOD
CBS primetime drama "NCIS: Los Angeles" is using JVC ProHD camcorders to produce the "surveillance video" monitored by undercover agents who are on a mission to thwart criminals that threaten national security.

The visual narrative of the series relies heavily on this surveillance footage which, according to the show's writers, is procured by a variety of sources ranging from security monitoring systems in banks and parking lots to "spycams" worn by the agents and installed in vehicles. The video is regularly displayed at the headquarters of their "Office of Special Projects," making it an element that has to be on set, ready for playback during the shoot.

A dedicated playback unit was created to provide the surveillance video to the set. Footage shot alongside the first unit on location is processed into clips with graphics, text, maps and photo montages during the first part of the shoot. It's quickly prepared for the portions of the episode shot inside the "NCIS:Los Angeles" headquarters, appearing on video monitors that include a large translucent screen, a touchvision screen and a wallsized main screen.

Surveillance tapes as used on the set of "NCIS: Los Angeles"CREATING 'THE LOOK'

During the show's first season (2009-2010), Director of Photography Victor Hammer experimented with a variety of recording devices, including some consumer-grade security cameras, to create different "looks" for the surveillance footage. But—in the interest of efficiency, quick turnaround and budget concerns—the process had to be simplified.

"We tried to standardize so there'd be the least amount of holdup," said co-producer Erik Whitmyre.

The workflow totally bypasses transcoding and post house input. An "NCIS:Los Angeles" staffer hands the flash cards from the JVC GY-HM100U camcorders to the show's editorial department, which downloads the .MOV files, edits them into finished segments on Final Cut Pro and saves them as digital files. These finished clips are taken to the set and played back using FCP during shooting.

Whitmyre said the Final Cut Pro workflow for playback definitely saves time and money (by his estimate $5,000-$10,000 per episode). In addition, he said, it simplifies the process, enables greater creative flexibility, and encourages collaboration.

The bane of post production finishing, according to Whitemyre, is accommodating changes and scheduling: the fight for time in an edit bay, plus the ability to book tech personnel. With the show's current approach, this is not an issue. "There's no need to schedule a room," he said. "Many people can work on it at the same time. And the system accommodates change much easier than any tape-based model."

Every editor and every assistant editor has a workstation. In fact, Whitmyre said he rented two extra stations dedicated to data processing (rendering, converting to various output formats) and "anything else that comes up."

Savings in the workflow also freed up financial resources for plug-ins and filters, both for visual effects and for further optimizing the process, extending the already robust platform provided by Final Cut Pro and Adobe's After Effects digital motion graphics and compositing software.

Many of these perks were provided by Hollywood-based network designer and post house DigitalFilm Tree, according to McKnight. "They supplied us with about 95 percent of the filters in Final Cut Pro and After Effects on top of what's standard," he said.

DigitalFilm Tree CEO Ramy Katrib agreed that "there's a lot of specialty software" on the playback system, including custom-designed programs written by one of his company's partners.

"A nonlinear editing system combined with networked nonlinear finishing is ideal," said Whitmyre. "You never have to worry about making last minute changes or running out of tools. It's good for the budget and for maintaining one's sanity."