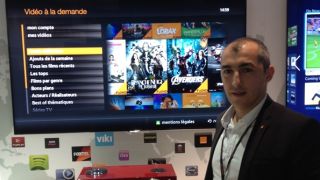 France’s Orange was at the 2013 International CES previewing a video-on-demand service it plans to launch this spring on a Samsung connected TV that leverages High-efficiency Video Coding (HEVC) to deliver bandwidth-efficient 1080p HD content OTT.

The Orange-Samsung HEVC implementation will be among the first, perhaps even the very first, in the world.

Although the official announcement of the launch is scheduled for February, Gilles Teniou, head of video standardization at Orange Labs, was beating the drum for the use of HEVC encoding and MPEG DASH to power the new VOD service at CES in Las Vegas.

“Thanks to HEVC, Orange will deliver HD content (1080p) at bit rates around 3Mb/s, whereas H.264 would require twice the bit rate,” said Teniou. Samsung’s 2013-model Smart TVs will support HEVC. The South Korean consumer electronics giant has released a new software development kit (SDK 4) for its Smart TVs, which will give developers access to the tools needed to build apps with MPEG DASH support.

According to Teniou, implementing HEVC for the VOD service, which will be available to anyone in France with a 2013 model Samsung Smart TV, regardless of their ISP, offers a couple of advantages. First, viewers will have access to a quality of experience, while at the same time allowing Orange to handle video traffic on its network. Second, it will extend the reach of Orange to more people who wish to access video content via the Internet due to the reduction in bit rate afforded by HEVC.

Orange will rely on MPEG DASH as the underlying adaptive streaming technology for the VOD offering.

Orange isn’t alone, however. Rovi also announced plans for HEVC at CES. During the Las Vegas gathering, the company rolled out its HEVC Development Program, which will allow developers to leverage the efficiency of the new codec.

According to a company announcement, Rovi plans to rollout HEVC-enabled solutions shortly after the standard is ratified early this year. Its first HEVC solution will be a new MainConcept SDK offering core professional HEVC encoding.

Rovi anticipates introducing HEVC support in its video delivery and playback solutions in the second half of 2013, the announcement said.