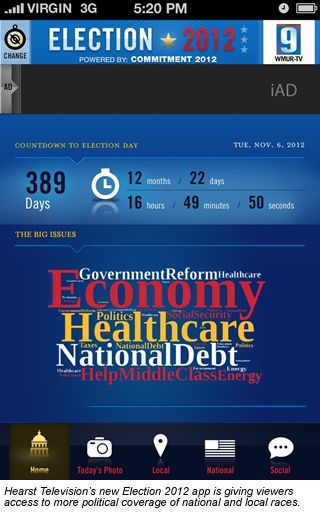 Hearst Television has launched an Election 2012 app featuring up-to-the-minute and in-depth election-related national content as well as content from the company's news stations in 25 markets.

Users of the app can browse local election and political coverage, access articles and view slides and videos from Hearst local stations. The app also offers local voter guides with information on voter registration deadlines and poll locations as well as biographies of candidates and their positions on the issues. Other features include: a countdown clock till Election Day, a photo of the day, Facebook integration and the ability to upload user-generated content. On election night, the app will offer election-night video, continuous election coverage, community updates and election results.

"This app should come in handy not only for voters in the 25 Hearst Television news markets, but for any political observer interested in the latest developments in closely contested presidential-election states like Florida, Iowa, Missouri, New Hampshire, New Mexico, North Carolina, Ohio, Pennsylvania and Wisconsin — and in states hosting tight Senate races, like Massachusetts — in all of which states Hearst Television has leading news stations and websites," said Roger Keating, Senior VP of Hearst Television.

Other features of Commitment 2012 include "12 in 12," a pledge of a minimum 12 minutes of airtime for daily political news and candidate-discourse coverage and an exclusive partnership with PolitiFact, the fact-checking website of the Tampa Bay Times.