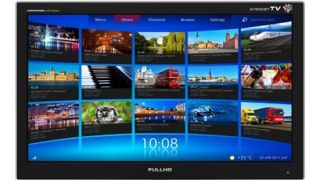 Forty-nine percent of consumers in the United States and the U.K. are viewing over-the-top (OTT) video via a broadband connection on their TVs, according to the results of a survey released Nov. 27 from Accenture.

The findings, part of the Accenture’s Pulse of Media Consumer Survey, reveal that growth in OTT viewing is additive, supplementing content that viewers watch on traditional cable or satellite TV. (In the United States, 50 percent watched OTT video via broadband; in the U.K., 48 percent did so.)

The growth rate of OTT video consumption has been dramatic, climbing from 8 percent in March 2011 to 49 percent today, the survey revealed. OTT subscriptions now are on par with those of satellite services, Accenture said.

In the United States, 27 percent of respondents said they subscribed to OTT services like Netflix Instant Streaming, compared to 28 percent who subscribe to satellite TV. In the U.K., the OTT subscriber level stands at 26 percent vs. 30 percent for satellite service.

Mobile devices also play an important role in the mix with consumers relying on them to watch content, create playlists, post videos on social media sites and access information about new TV shows via social networks, the survey said.

“We are seeing a seismic shift in consumer viewing habits,” said Robin Murdoch, a managing director in Accenture’s Media & Entertainment industry group. “The connected consumer is now comfortable viewing TV shows and video on a variety of screens, as well as sharing opinions of that content via social channels or recommendation engines.”

Younger viewers are most apt to use connected TVs and mobile devices to view video content.

The Accenture survey also found that in the United States, 16 percent of consumers subscribe to gaming console-based video delivery services (9 percent in the U.K.), and 4 percent subscribe to set-top subscription services such as Apple TV, Boxee or Google TV. (In the U.K., the figure is 3 percent.)