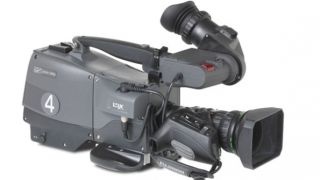 At IBC, Grass Valley took the bold step of revealing a product roadmap for the next three years that includes “refreshing” its entire product portfolio with a common, software-centric architecture that allows customers to pick the exact features and functionality of the cameras, production switchers and servers. All of the products can be tightly integrated into a variety of file-based workflows targeted at live sports, news and playout applications that can be tied together with the company’s new service oriented architecture (SOA) platform called Stratus.

It’s a risky move that was clearly necessary to distinguish Grass Valley from its competitors.

Company president and CEO Alain Andreoli stated that the new three-year plan is part of the company’s ongoing efforts to make Grass Valley profitable and “one of the leaders in an industry looking for a leader again.” He said the past two years have been spent paring down the existing company infrastructure and executing on a plan to make manufacturing and product development more efficient. He promised that by 2014, all of Grass Valley’s product lines would be completely different from what they are today and would all support, at a minimum, 1080p 50/60 production.

All products going forward will rely heavily on software and IP-based file delivery to make them format agnostic and capable of handling emerging technologies with a simple software upgrade. Andreoli said the products will be designed for the “middle” of the market and will include the capability to be customized for individual users in the news, live production and playout market segments.

To this end, Grass Valley introduced a new series for cameras, called the “LDX” series, that can be equipped with a number of features or can include only a few to keep cost down. Formats from SD up to 1080p 50/60 HD can be accommodated with the cameras’ built-in Xensium CMOS imaging sensors. The same flexibility will be built into Grass Valley’s next-generation switchers (the “K-Frame”) servers (The Summit Media server) and slow-motion controllers (part of the K2 Dyno Replay system).

“Why not be the leader in the space?,” Andreoli asked, adding that nearly 50 percent of Grass Valley’s current workforce is made up of product engineers. “In order to do that, we must innovate.”

He cited the recent finding of a “Big Broadcast Survey” conducted by market research firm Devoncroft Partners that showed that among the thousand surveyed around the world, the Grass Valley brand is associated with quality and reliability. Andreoli also said support services and significant hand-holding were a big part of the new strategy as well.

Graham Sharp, Grass Valley’s new Senior Vice President of Corporate Development, was introduced and spoke about the use of “fast packet-switching and optical technology” to meet the demands of new types of production workflows.

“We believe that nonlinear production will be the future,” Sharp said, adding that the products introduced this year are just the beginning of a whole new generation of products. It will all be built on common, format-agnostic, file-based platforms that can be networked together using Grass Valley’s “GV Link” protocol.

“From camera to playout, our entire product portfolio has been or will soon be completely refreshed,” he said. “We’re [Grass Valley] back.”

The new strategy appeared to be immediately resonating with customers in attendance. Sharp ended the company’s annual IBC press conference by announcing that 21 cameras had already been sold on the booth on the first day of the conference.