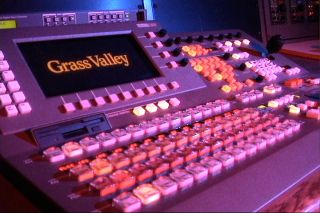 NEW YORK—Solving the workflow problems in live production will be among the keys to the future success of Grass Valley, executives told the press in a pre-NAB event this week.

The gathering also allowed former Grass Valley chief executive Tim Thorsteinson to re-introduce himself to the industry. Thorsteinson headed up Grass Valley during its transition as a division of Tektronix to a separate entity more than a decade ago, then left in 2003 to become president of Leitch, which was acquired by Harris, where he led the broadcast division until resigning in 2009. Thorsteinson reiterated his affection for the broadcast industry and his optimism for the future of the Grass Valley brand.

“I love Grass Valley, it’s always been a great business and a solid brand,” he said. But he also warned that 2013 will be “a difficult year.”

“The second half of last year, there was a big drop off in revenue for everyone,” he said. “The best companies saw a 10 percent, others saw it in the 20 to 40 percent range. Part of that was due to Europe, part was due to the end of the Olympic cycle. I’ve seen four of these downturns in the 20 years I’ve been in this business, but this downturn was particularly deep and broad. All geographies experienced it, and it was across entire product offerings.”

He also noted industry changes with the increasing commoditization of products.

“As Moore’s Law marches forward and standard platforms can do more processing, our value has shifted into software,” he said, adding that within the next year or two, Grass Valley will begin selling software licenses for their products, which “will be a nice revenue stream.”

While acknowledging that much of the work laid out by his predecessors since the company’s sale to equity investment group Francisco Partners in 2011 would continue, Thorsteinson outlined what aspects of the market he believed the company needed to focus on.

NONLINEAR PRODUCTION
Most of Grass Valley’s portfolio is used heavily in live production, an area that the company believes may be the Holy Grail of future revenue opportunities.

“Our niche, which is live production, live content, live sports, is a nice market to be in right now,” Thorsteinson said.

Graham Sharp, another industry veteran who recently returned to Grass Valley after years with Avid Technology, said that live events—which he noted is a $2 billion market—power the premium pricing model.

“Live is still the place where you can get the premium price for content,” he said. “People are trying to get more content from live events and spread it further through the different platforms.”

But he also bemoaned the fact that, unlike other elements of the broadcast production world, which have gone nonlinear, the production workflow for live is still linear.

“The last bastion for linear production is live events,” Sharp said. “Workflow hasn’t changed for the past nearly 30 years. It hasn’t changed because of the image we need and the immediacy of the production needed.”

To overcome these hurdles, Sharp coined the new phrase “nonlinear production” to characterize Grass’s new approach. Currently, much of the live production workflow involves having to deal with “silos” that segment the production process. Technology changes will allow Grass to build integrated platforms focusing on specific markets such as live sports, entertainment, events, news and then the playout of that content, according to Sharp.

“Technology is now enabling nonlinear production [in live events], making it more efficient, including the delivery to multiscreen and multiplatform,” he said. “Whoever gets this right first, you’ll just overrun the live production market if you get it right.”

As part of its live production strategy, Grass Valley will converge its products into three standard platforms, according to Sharp: a standard camera platform, infrastructure platform and software platform.

“Every product we introduce over the next year is going to be based on one of these three platforms,” Sharp said.

He emphasized that the move towards these three platforms will help achieve the company’s goal of making technology more user friendly and unleashing the creative process.

“You abstract the technology layer below the user interface layer, you collect the tools together and people become less dependent on the technology and more on the task at hand,” he said.

STRATUS UPDATE
The company announced several new products and product strategies for the NAB Show, many of them embargoed until March. The company did announce that its Stratus platform, which has been out for a year, now boasts over 1,500 users worldwide and has been updated with the integration of Edius for proxy editing and a new rules engine for workflow automation. Since Stratus was launched, there has been some speculation on exactly what it is. Sharp emphasized one thing it is not.

“It’s not a MAM,” he said. “Stratus is an application framework and the key differentiator is the UI and the way it works with the tools. It’s very focused on the user experience.”

Sharp added that the Stratus platform will help Grass customers automate the distribution of content to multiple platforms.

“We’ve got to go back to that concept of ‘create once, publish many,’ which many people have talked about for awhile, but no one’s really implemented,” he said. “If you segment the material in acquisition or soon after that and the rest of the system is automated, you’re very, very efficient and cost effective.”