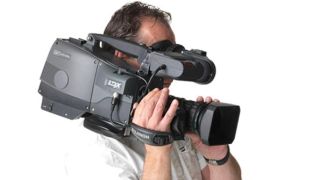 Broadcasters are in the middle of a rapid evolution to the use commodity IT platforms for appropriate parts of the workflow. For the real-time “live” broadcasting, true broadcast equipment still rules the roost, offering familiar operation to personnel under stress of the event, rugged construction and decades of design experience.

I talked to Alain Andreoli, president and CEO of Grass Valley, about his views on the evolution of the business — for broadcasters and for technology vendors. Grass Valley continues

to meet the demand for conventional broadcast products, including its renowned cameras and switchers, but it is also innovating in the IT for broadcast.

Andreoli posed the question: “When is the time for optical networking and integrated end-to-end IT workflow? Nobody knows. Is it right now? In three years? In five years?”

Everyone accepts that there is a business and technology revolution going on in the visual media business, but television still offers advantages for live events and sports coverage, and still remains a great way to advertise to vast audiences in support of consumer brands.

On the technology side, much of the talk is around the move to file-based operation and IT workflows.

“We are at the point where early adopters are taking up IT workflows, but it will be a long time before the entire market has changed” Andreoli said.

One only has to look at the number of stations still wanting to migrate to HD to see how slow change can be.

“We are now in second wave," he said, "with the larger customers who can take advantage of scale” changing to more efficient workflows.

Is there a need to change? Andreoli explains the problem: “The new media entrants like Netflix may get all the rewards, but the danger is that the broadcasters (who do not migrate to new technology platforms) will be left with all the cost. The reward for broadcasters has to come from the quality and quantity of live material that they are creating.”

Cameras won’t go away wIth the move to IT

Turning to Grass Valley, Andreoli said, “We think having cameras is a big plus, they are never going to go away.”

And what about the move to truckless remote production using fiber links back to the switcher at the TV station? Andreoli believes that “there is a big value to have the producer in the stadium, to capture the buzz of the crowd. You can send a camera truck to the stadium and switch at base. Another possibility is fixed cameras, but they are not used most of the time, so they are not an efficient use of capital.”

One new approach Grass Valley is taking is to make cameras more configurable. A feature like slo–mo could be turned on through a software license. Having flexible tools that can be configured cuts down on inventories and provides for those who want to get best-of-breed performance. Those who want a more cost-effective operation, where the programming doesn’t warrant the best, can use the camera in the base configuration.

Day-to-day sports events do not need the tools found at the Olympics or World Cup. A base configuration may be good enough for the run-of-the-mill production, and the extras enabled for world-class events that need the extra facilities. Such software-enabling allows producers to match the cost to the requirements of the event.

One of the business methods that has been adopted in the IT sector and is coming into favor for broadcasters is outsourcing, swapping capital expenditure for operational expenditure. This brings additional players between the technology vendor and the broadcaster, specifically systems integrators and service providers.

Andreoli explained how broadcasters used to employ sufficient technologists to plan new projects. The technology of broadcast systems is now getting so complex and evolves so fast that it no longer makes sense for broadcasters to retain a pool of skilled engineers when they may only be needed for six months every three years.

“You need scale for systems integration,” he said.

The current playout service providers “are doing a great job of providing services after the broadcaster has done the ‘magic’ of live production,” he said. "With the economies of scale and using only a few large facilities, they can provide cost-efficient operational services. Most broadcasters are now thinking, 'What am I going to use for my next workflow tool, which will make me more efficient?'”

Over the last five years, some major networks have built their own workflow systems, but now they are running into the problem of how to maintain them. The interfaces to third-party equipment change as new software is released, with the consequence that the broadcaster must constantly update the custom interfaces.

Grass Valley has its own workflow platform — Stratus.

“It's an SOA (Service Oriented Architecture). You can move file across and enterprise locally of globally, and it uses open API,” Andreoli explains. “It gives a backbone to start building an integrated nonlinear production chain. You become your own private cloud.”

The product is proving popular.

"We will reach 200 installations of Stratus in the next three to six months,” Andreoli said.

Andreoli would like to see more standard interfaces to support interoperability and give broadcasters the ability to change services without being locked via a custom interface to one vendor. He is a great believer in a few vendors taking things forward, rather than “committees of users sitting round deciding standards.”

Andreoli would like to see more cooperation between vendors to provide broadcasts with end-to-end integrated systems that are more open, more standardized. The broadcast community is developing an SOA as part of the joint AMWA/EBU FIMS (Framework for Interoperable Media Services) project.

Asked to compare Stratus with FIMS, Andreoli said, “Stratus is built on the same SOA and principles as FIMS, but Stratus is ahead in the game. We have already defined about 20 services. I have no doubt that we will eventually become compatible and take advantage of the momentum behind FIMS, but we are ahead of FIMS. We welcome the initiative of FIMS. We think it makes sense, and the more momentum it gets, the better for the industry.”

Andreoli continued to explain how some large networks have built huge systems that have become obsolete within five years or so. To extend them or add facilities has proved difficult, and the best option has been to start again with a new architecture and new system. Andreoli calls for a more standardized and more agile approach so that broadcasters can respond quickly to challenges of new entrants providing content to viewers. The SOA is such an architecture that allows for easier change to services. Other industry verticals have already adopted the SOA, but broadcasters are finally catching up.

Grass Valley has remained one of the strongest brands in broadcast technology. One can think of companies like RCA and Ampex, once leading brands in this industry, but now gone. Grass Valley is taking a different approach in leading innovation in new ways to run technology platforms for broadcast — one good example being the Stratus media workflow application framework for nonlinear production. It doesn’t pay to stand still, for broadcasters or technology suppliers.

Andreoli has a strong vision for the future of Grass Valley and for broadcast engineering in general. The current changes are much more disruptive of the evolution from monochrome to color, from standard to high definition. Those changes took place without any serious disruption to the business of television. The next round of change will be different.